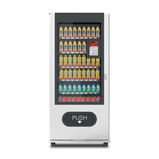 The Internet of Things increases retail opportunities in vending.

A vending machine is any automated or electronic device that dispenses goods (tangible personal property) when the buyer inserts payment into the machine.

The intelligent system that offers a richer, more engaging customer experience, whether it is selling soft drinks or services. Sixty one percent of respondents to Intel’s survey said they would like their vending experience to be more interactive and fun, with 62 percent expressing a desire for touch screens, and 17 percent wanting to operate machines using hand gestures. It is no longer just about delivering snacks. Vending is truly becoming a new retail location.

Safety
The steel structure secures the strong ability of resisting damage; and the users can pay to borrow or return the book in an efficient flow.

Intelligent
The system of Intelligent Book Locker can automatically identify the action of loading and unloading books, and realize the internal circulation of borrowing and returning service of the books; and the interconnection with the operator's system can support the user's inquiry, renewing and other services.

Strong Adaptability
The Intelligent Book Locker is available to work in a variety of complex environments(anti-corrosion, anti-interference, etc.)

Convenience
The Intelligent Book Locker can provide users with 7/24 service, and it is easy and efficient to borrow or return the book with one click.

Smart Storage Locker, also known as Electronic Lockers, Self-service Lockers, is applicable in the places of the large passage flow, such as supermarket, shopping mall, entertainment venue, swimming pool, library, exhibition hall, restaurant, station, dock, and airport. The common characteristics of these places is the large population flow, high mobility, and more storage items, and the security requirement of the storage is high, which is very suitable for the use of the disposable items storage solution with smart storage lockers.

SHENZHEN ZHILAI SCI AND TECH CO., LTD, headquartered in Shenzhen, is the leading locker manufacturer in China, specialized in electronic lockers research and development, manufacturing, sales and relative services. Since 1999, ZHILAI had won worldwide reputations as an Original Design Manufacturer and developed high-quality lockers, such as delivery locker, refrigerator locker, barcode locker, RFID locker, APP locker, and charging locker etc.
ZHILAI is not only a national high-tech enterprise but also the pioneering company to develop and produce the Delivery Lockers in China. ZHILAI has an experienced R&D teams, including: software, electrical control and mechanical design. Moreover, ZHILAI owns 25 patents and software copyrights in the field of electronic lockers.
ZHILAI is also a comprehensive locker manufacturing company, its business includes metal processing, product finishing and painting, electronic hardware and software developing and assembling.
As a pioneering locker maker, ZHILAI strictly complies with IS09001 QA/QC system, CE, ETL certificates, and do what he can to meet customer’s requirements. Apart from the headquarter and factory of Shenzhen, ZHILAI had invested a new plant in Xianning, Hubei Province, China. Now the production capacity reach to 150,000 units per year.