Registration is required to use the networking service and a separate registration for matchmaking. Please register for Matchmaking first.

Welcome to Matchmaking. Would you like to get in touch with ?

BellCount S515 is an accurate and reliable one and half pocket multicurrency banknote counter with sorting functions. The machine includes an advanced currency auto-switch; BellCount S515 will automatically select the right currency before counting.

BellCount S515 handles up to 20 different currencies. The banknote recognition and detection is based on state-of-the-art two-sided CIS scanner and image processing technology. S515 can also read the serial numbers of the banknotes using optical character recognition technology.

Banknotes can be sorted by denomination and physical orientation. Furthermore, BellCount S515 can sort by banknote issue; in this way it is possible to sort out old issue banknotes. Suspicious banknotes will be ejected to the reject pocket and you can view a detailed counting report after the counting job. 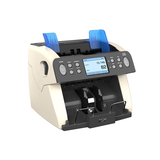 BellCount V2510 has value counting functions for sorted or mixed denomination banknotes. When a suspicious banknote is found, the machine stops and you can easily remove the rejected note.

Up to 20 different currencies can be installed. The banknotes can be processed in all four orientations.

Furthermore, BellCount V2510 is very easy and intuitive to operate. The clear, graphic display gives a perfect overview.
Counting results can be presented in various ways on the display and you can also print the counting results on an external printer (optional).

The BellCount V2510 includes an advanced currency auto-switch function, which ensures that the machine will automatically select the right currency before counting.

Evision SD handles banknotes in the four orientations and with only one button, it is very easy for all cashiers to use.

Evision SD displays the total sum and number of accepted euro banknotes in a large and clear LED display and an acoustic signal indicates when suspect banknotes are detected.

Evision SD is very tolerant to dirty and worn banknotes and a rechargeable battery can be inserted for portable operation (optional).

When new banknotes are issued, the software is updateable by a standard microSD Card or USB cable. It has never been easier.

Back in the early nineties, BellCon was founded on the idea that the knowledge from our years as a manufacturer of domestic lighting could be translated into the development of superior high quality UV lamps for banknote detection.

It all started with UV lamps

From 1992 and throughout the nineties, the Danish company BellCon manufactured UV lamps which achieved unparalleled success on the European market and laid the foundation for further products that were on the cutting edge of design and technology.

In 1994, BellCon began to develop a new electronic detector, specifically designed for detection of US dollar banknotes. By using new technology, this was the first desktop detector in the world, able to detect the very best professionally made counterfeits; the so-called “Super dollar”.

This further spread the knowledge of BellCon on a worldwide basis and solidified our reputation as an innovative pioneer in the field of cash handling equipment. Throughout the years, the “SuperVision” detectors have been continuously improved with new technologies to maintain their status as the best of the best in the particular niche.

The newest generation called SuperVision mc2 uses cutting edge technology and is the result of years of money detection experience. Its universally praised, ergonomic and user-friendly operation is highly appreciated by users.

In 2001/2002 BellCon took another step to provide a complete range of products and developed the Evision DT detector to accommodate the need for a strong euro detector as this currency was introduced in 2002. Evision has received widespread acclaim for its unique design and was developed through consultations with specialists and with strong support from the European Central Bank. The Evision DT was later complemented by the Evision 4D and the new Evision SD, which has been specially designed to fulfil all modern retail shops’ need of convenient and fast verification of euro banknotes.

BellCon embraces the forces of globalisation with open arms and we have been intensifying our cooperation with a few quality suppliers and partners in the Far East. This has allowed us to focus on our strengths and combined with the talent and know-how of our partners, we find ourselves in the strongest ever position for the future.

In recent years, because of continuous demand from our wide and trusted network of distributors, BellCon has further expanded the product portfolio which now also includes various Danish designed banknote counters and further equipment used for the counting and sorting of banknotes and coins. However, we are continuously looking for new products that will give our customers the opportunity to create added value to their business.

In 2017 we celebrated our 25th anniversary, feeling stronger than ever and ready for the exiting challenges of the next 25 years. Since then, we have released new products every year and here in 2020, we have our strongest ever product line-up.

Company information as a PDF file