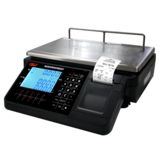 Cely PI-150 scales are ideal for weighing operations with receipt printer, specially in small shops. They can be connected to a PC, for sending and receiving data and updates, and to a cash drawer.

The Dibal Mistral Series hanging scales are ideal for installation in fishmongers, butchers or counters with little space. These retail scales are easy to use and offer excellent features due to their memory and their fast and reliable communications among scales, PC and mobile devices.

Mistral Series electronic scales, available in stainless steel or ABS plastic housing, can have a receipt printer or a label printer. 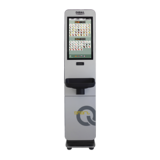 High performance PC based scale kiosks, with colour TFT touch screen and receipt printer. A complete solution for your business with all the features of a PC and very intuitive use.

Dibal, S.A.’s origins lie in 1985, when we began manufacturing retail scales as an integral part of the Novatronic Group, which was acknowledged for its activities in the field of electronic engineering and communications.

The conjunction of Novatronic and Dibal’s know-how led to the launch in 1986 of the electronic scale fitted with a system for communication with a PC which was ground-breaking in Spain. Three years later, we developed the scale with two printers (for receipts and labels), a solution which is highly valued by our customers in the retail sector due to the savings implied in costs.

With an aim to meeting the continuous requirements of our clients, we broadened our field of action, to develop industrial weighing equipment and automatic weighing and labelling systems in 1992.

In subsequent years, we continued to work to tailor our offer to the market’s changing needs: scales adapted to the change in currency (€), PC scales, industrial equipment with dynamic weighing, etc.