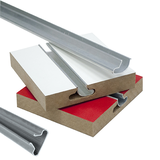 ABBOTT’s patented aluminum snap-in inserts, fitted from the front of the panel, allow panels to be fixed to the wall or frame before being inserted. They double the load bearing capacity of slatwall panels as well as protecting the slots from damage. ABBOTT also produces standard T shaped inserts.

A panel is constructed from 3 mm or 6 mm thick MDF with 6mm diameter holes at 50 mm centers.

Abbott is a Russian-British joint venture company formed in 1999 specializing in the manufacture and wholesale distribution of shopfittings and display equipment.

The company is the leading manufacturer of shopfittings in Russia and one of the largest slatwall panel producers in the world.

Many of the extensive Abbott ranges of equipment, to include slatwall accessories, coat hangers, display racks, mirrors, mannequins and shop furniture are produced in its in-house state-of-the-art tube bending and automatic galvanizing/chromium plating production lines.

Abbott’s systems are offered for sale through a network of authorized distributors in Russia, the CIS and worldwide who are supported by specialized design, development and custom-made teams.