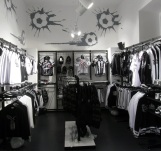 Fan Shops of the large soccer teams are a picture book example of Store Branding. For some time now, clubs have not been making most of their money with admission tickets. It is sponsors and advertising partners, TV rights and broadcasting rights and merchandizing that have turned them into million-dollar businesses. The club colors shape the brand image.

The Fan Shop of Manchester United in the Old Trafford Stadium is in a league of its own– if only because of its size: 1500 square meters of sales floor. On match days several thousand fans frequent stores like these within two to three hours and have check registers go “ka-ching” non-stop. The stores highlight the club colors. Red dominates at Manchester, while green and white are Celtic Glasgow’s colors. The shops were outfitted by EuroShop exhibitor Umdasch, which also worked for the German HSV. 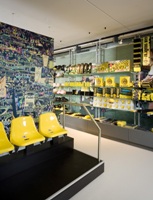 The Fan Shops of the larger clubs are carefully staged. For the most part they are built in arena design – i.e. the merchandise is presented from the front to the shelf in the background in an inclining fashion. The upper level above the shelves is used for emotional messages –team photos, pictures of the stars and match scenes. On the second level, the merchandise is shown head-on. Soccer jerseys play a very important role here. Sorted by color and size, they hang below on clothes rails. Shelves to the left and right frame the display in the front, which allows you to look over and get a good overview of the store. Fan Shops usually have especially wide aisles to be able to cope with the onslaught of fans.

Thermopal participated in the Fan Shop of FC Bayern München (Soccer club Bavaria Munich) in the Allianz-Arena. The EuroShop exhibitor delivered decor in “basalt gray“, “signal red“ and “light ivory“. Shelves and displayed goods were designed in those colors. In contrast, black and yellow dominate at the BVB, the Fan Shop of Borussia Dortmund. This was a home game for Lang Shop & Objekt from Dortmund.

But it’s not just clubs that stage themselves as a brand. Sport outfitters also present fan merchandise in a special way – as an island of merchandise, sort of like a shop-in-shop, or as a fan corner. The Black & White Shop in Munich is unusual. All black and white soccer teams of the world are meant to be united here. Owner and founder Branko Kerkez opened the store in the heart of Munich in the Lindwurmstraße in February 2010.

Wanzl Ladenbau developed the concept and also put the plans into action. The store was meant to set itself apart from traditional sport specialty stores. Alleys were widened, new walls inserted and painted and a new floor was installed. The sales counter construction is reminiscent of a goal, the walls were laminated using a foil procedure with abstract “splash-footballs“ and the lighting was bent similarly to a center circle on a soccer field and custom produced. Each soccer team has their spot on the sales floor with original fan merchandise such as streamers, flags and soccer jerseys. LCD screens inform customers about the various soccer clubs and showcase their goals, tears and triumphs.