Successful Kick-Off at EuroShop: Preparations for C-star 2015 in Shanghai in Full Swing 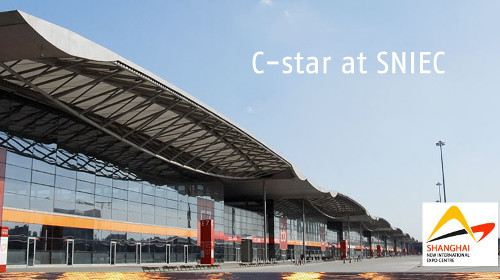 13 to 15 May 2015 will see C-star, an event forming part of the EuroShop family of trade fairs and specifically geared to the Chinese market, being held in Shanghai for the first time. The kick-off for C-star at this year’s EuroShop in February could not have been any better. At this early stage in excess of 300 firms from 38 countries have already stated their interest in the new retail trade fair in China.

Registrations have already been received from the USA, Australia, France and China itself. The Düsseldorf-based trade fair organisers are determined to establish a high-quality event with a high percentage of international exhibitors as a firm fixture in the event calendar of the People’s Republic.

Current facts and local developments confirm that C-star is “arriving” right on time: With 1.35 billion inhabitants China is the most populous country in the world ranging fourth in terms of land surface area. Shanghai is among China’s top 4 cities with the highest net per-capita income. With 23 million inhabitants and the highest proportion of foreign companies including numerous top brands, Shanghai’s catchment area offers second-to-none opportunities. Moreover, the dynamic construction of shopping centres in Shanghai proves that this business hub makes very high demands on retail in China. At present, there are some 100 shopping malls in existence with further ones under construction. Every year some 300 shopping malls open in China, by 2015 the total number of malls is expected to reach 4,000. Just by way of comparison: There are currently just under 460 shopping malls in Germany.

Furthermore, the high demand and rising quality expectations of Chinese citizens is expected to prompt a marked rise in attractive local brands, which will, in turn, fuel a strong interest in extraordinary and up-market shop-fitting solutions so that local demand for an event covering the ranges featured at EuroShop is constantly on the rise. Messe Düsseldorf has therefore been approached with the request to establish a stand-alone retail platform in China by both Chinese and international EuroShop exhibitors.

C-star will follow its major role model EuroShop by also covering the segments of Shop Fitting, Lighting, Refrigeration, Store Design, Retail Technology, Visual Merchandising and Marketing as well as Exhibition Stand Construction but on a smaller scale and specifically geared to the Chinese market. Concepts such as the Designer-Village, for example, will also be realised as part of C-star 2015 analogous to EuroShop.

Like at EuropShop 2014 the multi-channel theme will play a pivotal role at C-star because the People’s Republic is the most attractive growth market for E-commerce activities. China currently registers 618 million web users, 164 million of whom shop online generating annual sales of US$ 23 billion. (Source: Retail E-Commerce-Index/ A.T. Kearney, 2014).

The show venue will be the Shanghai New International Expo Centre Co., Ltd. (SNIEC). Since its foundation in 1999 the SNIEC has developed into what is the People’s Republic’s most modern and highest occupancy exhibition centre today, posting double-digit growth rates from the outset. The venue is owned by a joint venture of the trade fair companies Düsseldorf, Hanover and Munich on the German side and a company operated by the city Shanghai. Early 2011 the Shangri-La Group – the leading hotel chain in Asia – opened a complex with 574 hotel rooms in the 5-star category, an office centre and a shopping mall directly connected to the exhibition centre. C-star is held as Messe Düsseldorf (Shanghai) Co., Ltd.’s own event in cooperation with the firm’s parent company Messe Düsseldorf in Germany. As with EuroShop, the EHI Retail Institute Cologne will act as a conceptual sponsor of C-star.