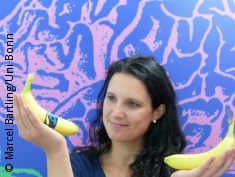 Laura Enax from the Center for Economics and Neuroscience at the University of Bonn.

A blue-green circle around a stylized figure in black with a raised arm: Since its launch in 2003, the Fair Trade logo has hardly changed. Currently, it is found on a great variety of products, including coffee, bananas, creams, wine bottles and even soccer balls.

Critically, the emblem influences subjective evaluations of products, as researchers at the Center for Economics and Neuroscience at the University of Bonn demonstrated in their latest study: While test subjects lay in a brain scanner, they bid on various food products. Each of these products was available in two versions – Fair Trade or conventionally produced. The results were clear: On average, participants were willing to pay around 30 percent more for products produced according to Fair Trade standards, compared to their conventionally produced counterparts.

As the study was conducted in a brain scanner at the LIFE&BRAIN Center in Bonn, researchers could also show that products labeled with this emblem led to increased activity in specific brain regions: For example, they observed increased activation in regions important for reward processing as well as frontal regions that process abstract product attributes (e.g. whether or not a product carries a Fair Trade logo, and the meaning of such a label).

Part of the frontal lobe ultimately calculates the willingness to pay in an area known as the ventromedial prefrontal cortex, (vmPFC), which refers to the area's location. "The higher the activity in the vmPFC, the more money subjects were willing to pay," explains Prof. Dr. Bernd Weber, neuroscientist at the University of Bonn. The scanner data suggests that the vmPFC integrates information from other brain areas and uses this information to calculate an overall value. Based on information from various regions, it reaches a decision: Would I pay 50 cents for the Fair Frade banana? Or just 30 cents?