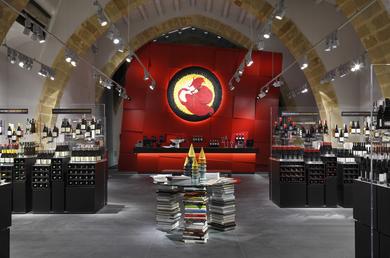 In the architectonic project as a whole, the lighting, managed by Studio Luminae’s Lighting Designer Lorenzo Bruscaglioni, played a crucial role. The light is key in accentuating the very details of the exhibition and the architecture which make this wine cellar tour a journey through time and the region itself. For the project, Luminae chose Reggiani Illuminazione's 14W and 16W LED SunLuce systems with colour temperatures of 3000 Kelvin in order to create warm and welcoming tones with a high colour rendering index (CRI 90). As it was not possible to mount the luminaires on the wine cellar’s age-old naves, electrified tracks were placed inside the new Winery at a height of 4 and 5 metres, with the luminaires on the lower track spanning the entire length of the room, to illuminate each exhibition stand individually. The precision of the optics allows the directed lighting of the bottles and the Florio brand’s typical produce, with a preference for narrow beam widths (12°) to showcase the detailing, and elliptical optics to illuminate the horizontal surfaces. The products were provided with on board dimmers to allow rapid and localised adjustment of the light quantity as needed. The 4 metre track also includes several ZeroZeroUno luminaires with 70W metal iodide light sources and Dali Dimmers, plus a special framing projector which allowed the background illumination of the walls behind the tasting counter and other decorative elements.