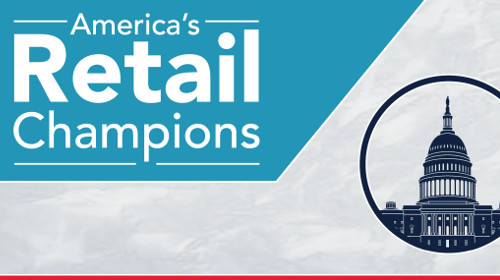 NRF established the America’s Retail Champions program this year to honor retailers who make their mark on public policy debates and decisions.

As part of the National Retail Federation’s Retail Advocates Summit and congressional fly-in, NRF today acknowledged outstanding small business retail owners and community leaders for their grassroots advocacy and engagement on federal, state and local issues. As part of the event, NRF named Art Potash, owner of Potash Markets in Chicago, for his exceptional advocacy and leadership on behalf of the retail industry.

“We are committed to advancing the retail industry’s public policy priorities on Capitol Hill and beyond,” NRF President and CEO Matthew Shay said. “As we gather retailers from across the nation in Washington this week, it is only fitting to recognize one of our industry’s most-engaged retail advocates.”

“On behalf of the entire retail industry, I want to thank Art for his commitment to advancing the retail agenda,” Shay said. “Art exemplifies what it means to be an active and effective grassroots advocate, and has demonstrated time and time again an unabashed willingness to step-up, raise his voice and lead in the sincere hope of making a difference.”

NRF established the America’s Retail Champions program this year to honor retailers who make their mark on public policy debates and decisions. A total of 44 retailers ranging from mid-size store owners to online sellers were nominated for the national recognition based on their willingness to speak up on the retail industry’s priorities, be it online sales tax collection, credit and debit card swipe fees or patent reform.

Potash was chosen from among five finalists who include Wogan Badcock III of Badcock Home Furniture & More in Mulberry, Florida; Ruthena Fink of Grand Jeté in St. Paul, Minnesota; Teresa Miller of Treats Unleashed in Chesterfield, Missouri; and Ann Wingrove of Completely Kentucky in Frankfort, Kentucky.

“While Art is focused day-to-day on his family grocery stores, he is passionate about the broader retail industry,” Illinois Retail Merchants Association President & CEO Rob Karr said. “As generously as Art gives of his time and resources to those in need, he does the same for his fellow retailers. It doesn’t matter if the issue is in the city of Chicago or Springfield, Illinois or Washington, D.C.; Art is a passionate advocate on any issue confronting retail.”

To recognize Art and his fellow Illinois retailers, NRF will add the state as a stop on its “Retail Across America” road trip, as part of the organization’s This is Retail industry perception campaign. NRF will partner with the Illinois Retail Merchants Association in early October to produce a content-filled campaign designed to drive awareness of the retail industry’s positive impact on careers, communities and innovation. Additional states featured in the series include North Carolina, South Dakota, Washington State, Ohio and California.