Mall of Scandinavia opens in Sweden 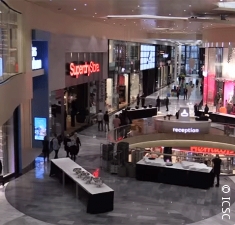 The biggest mall to open in Europe this year made its debut last week, in Sweden. Perhaps the name “Mall of Scandinavia” is fitting, given that the project is the largest in the three countries that constitute the region: Denmark, Norway and Sweden — total population nearly 21 million.

At 101,000 square meters (about 1.1 million square feet) over seven floors, the Sweden-based mall is a mere few minutes from downtown Stockholm and has drawn some of the region’s biggest and best-known retailers, including several first-timers to Sweden. Watch shoppers stream in on this video.

Judging by statistics for the Swedish and Stockholm economies and the shopping center’s catchment area, it may be easy to see why developer Unibail-Rodamco plowed some €640 million (about $715 million) into Mall of Scandinavia, making it the largest in the firm’s portfolio of 72 shopping centers. Indeed, Sweden is seventh-richest in the world, in GDP terms. “Sweden is a very hot market, and retail trade has grown — growth figures are very, very good,” said Lars-Åke Tollemark, Unibail-Rodamco’s Nordic managing director.

“This year, for example, retail trade will grow by 3.5 percent to 4 percent. Over the last 15 years, there’s never been a minute, even during the financial crisis, when this growth has been affected.” Furthermore, Stockholm is among the fastest-growing capital cities in Europe, he says. “We have 2.3 million people within 60 minutes of our center,” he said. “And within 90 minutes, a third of the Swedish population can reach it where it’s located.”