Less than one in four consumers feel retailers understand their needs

Retailers risking £120BN of spending from unsatisfied and unfaithful consumers 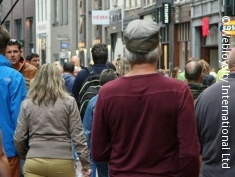 UK consumers are unsatisfied with most aspects of their retail experience, a third find shopping more frustrating than five years ago and six in ten are using a wider range of retailers than at the height of the last recession.

This is the worrying story for retailers told by new research commissioned by leading online savings provider Webloyalty. In total retailers risk losing more than £120bn of consumer spending, most of it in the food and grocery sector, from defections to other retailers by unhappy consumers.

Three quarters (74%) of consumers are unsatisfied with at least one aspect of their shopping experience, with service (53%) and product range (47%) surprisingly beating price (36%) into third place in shoppers list of gripes .

Less than one in four consumers (23%) feel retailers understand their needs. This suggests that far more needs to be done – especially in store – to meet the expectations of a personalised service that online savvy shoppers are increasingly used to. Online shopping is the silver lining uncovered by the research, with 71% of respondents reporting themselves satisfied or highly satisfied with the online offering of the retailers they use.

Rudeness from staff (57%), poor quality items (44%) and dirty stores (43%) are the top three reasons given for considering defecting to an alternative retailer. If all dissatisfied consumers changed stores, more than £120bn per year would be spent elsewhere, mainly affecting the food and grocery sectors . Yet engendering loyalty is more important than ever, given the marked increase in the number of retailers consumers are using.

More than half of all shoppers use a greater number of retailers than five years ago, with clothing (61% of consumers shopping around more) and footwear (58%), beating out food and grocery (52%) despite the rise of the discount supermarkets.

But it’s not just the number of stores that have increased the choice consumers are offered. Globalisation, the rise of online shopping and increasing personalisation have all transformed the availability of products today. Comparing the availability of products an average consumer had easy access to in the 1970’s against 2015, the explosion of choice is easy to see. From only eight titles widely available in the 1970’s, more than 14,000 computer games are on sale today. Fewer than 100 vehicle models were on sale 40 years ago, compared with more than 1,350 now. For wine, fewer than 40 varieties were widely sold, against more than 12,000 now.

“As more and more of our shopping moves online, retailers should take some encouragement from how satisfied consumers are with the quality of their web offering. But they shouldn’t give in to the temptation to abandon the high street. Customers are looking at both online and offline stores to offer an experience, excitement and inspiration,” said Guy Chiswick, Webloyalty’s Managing Director for Northern Europe. “Instore is still critical given the size of it compared to online. It is, in fact, one of the key factors that encourages consumer loyalty when choice makes it easier than ever to stray.”