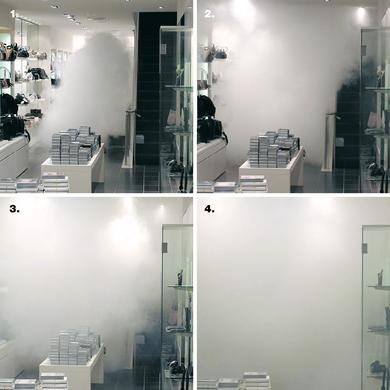 Jewellers, opticians and other retailers at risk increasingly take the offensive and use the shops' fog cannons against criminals trying to rob their shops. While this is a new trend in some countries, fog has been used successfully during robberies in other countries for several years - for example in the UK. The proactive use thus also forms part of the adopted EU standard for security fog protection.

Criminals always look for the weakest link of the chain. When banks are made cash-less, massive security measures are put in place for money transports and service stations get payment machines, burglars target more easily accessible valuables in companies and private residences.

This trend is evident in private residences and in the retail industry where heavily secured homes and shops are not often burglarised, but where robberies are committed instead while the residents are at home or the shops are open - and it is easier to get hold of the valuables.

The trend is new in Denmark, but is well-known in the UK, for example, where jewellers and the Bank of England itself has chosen to use security fog protection. The fog cannons are triggered manually by the staff at the moment they perceive a threat from intruding gangs.