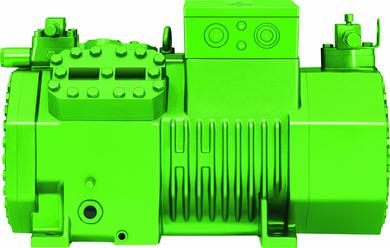 The BITZER Group has been manufacturing CO2 compressors since the middle of the 90s. With this experience, the specialist in refrigeration compressors is always further developing its CO2 compressors, offering an extensive product range.

BITZER expanded its series of semi-hermetic refrigeration compressors for transcritical CO2 applications to include smaller and larger models. With the introduction of the 4PTC-6K model for lower displacements and the 4DTC-25K and 4CTC-30K models for higher displacements, the series now ranges from 4.3 to 25.6 cubic metres of displacement per hour at 50 Hz. As such, the transcritical compressors boast energy efficiency and exceptional versatility. BITZER’s the only compressor manufacturer to also have its performance data certified by ASERCOM (Association of European Refrigeration Component Manufacturers). All compressors for subcritical CO2 applications and most of the compressors for transcritical applications have been integrated into the certification programme. The efficiency of the system and thus the compressor itself are worth taking a look at. With CO2, only very small amounts of direct greenhouse gas emissions are released, so that when it comes to these applications a greater focus is placed on reducing indirect emissions through energy consumption.