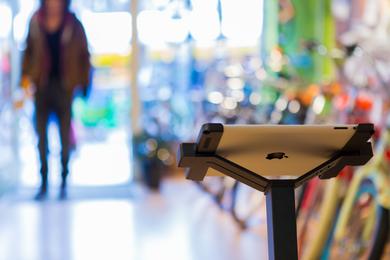 Delft, 8 January 2014 - An increasing number of retailers and fairs use tablets as a point of sale, information kiosk or interactive installation. Secure installation of the equipment is essential in these situations. Delft designers went along with this trend and developed the IVY, a tamper-proof tablet display in a slim design. The IVY will be launched February 2014 during the trade fair 'Integrated Systems Europe' in the RAI exhibition center Amsterdam and the trade fair ‘Euroshop 2014’ in the Messe Düsseldorf.

The Ivy distinguishes itself from other tablet stands by its open frame. While other manufacturers prevent theft by using enclosures with only an opening for the screen, the IVY is an open, V-shaped bracket. “Tablets are designed with a sense of style. Therefore we were looking for a design that considers the aesthetics of the tablet as much as possible,” according to designer Menno Pleij.

The result is a display which is not much bigger than the tablet itself. Pleij; “The strength of the design is its simplicity. Hiding the power cable and integrating a lock was a challenge. Our solution is characterized by its symmetric design in which both the cable and the lock are integrated in the bracket in an inconspicuous manner.

The annual fair 'Integrated Systems Europe' takes places at the RAI exhibition center in Amsterdam. It is an international trade fair for professional AV and electronic systems integration. The Euroshop is held for the 18th time by Messe Düsseldorf and will be the engine for ideas, innovations, solutions, contacts and business for the retail industry. The IVY can be found in hall 01, stand C26.

The IVY is a product of Techtive BV, a Dutch design firm for industrial design and engineering. An earlier award-winning product of these young designers was the Vanclaes boat trailer. EDITORS NOTE (not for publication) Images can be downloaded at: www.theivy.eu/press Contact information: Joost Zeegers, joost@theivy.eu, +31 (0)6 422 872 46