India and 'MINTs' among fastest growing 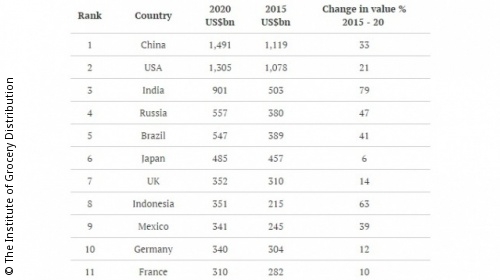 Chinese grocery sales are set to grow by a third between now and 2020 and reach US$1.5tn per year, according to IGD’s new forecasts. China will comfortably retain its position as the largest grocery market although others will grow faster.

Highlights from IGD’s latest sales projections include by 2020:


Joanne Denney-Finch, IGD chief executive, said: “Although growth prospects appear limited in Europe at the moment, this is a time of tremendous opportunity for grocery companies further afield. The vast majority of global grocery growth will come from Asia, Africa and the Middle East supported by increasing affluence, urbanisation, and rising population. With many European products and brands highly regarded in these regions, this will be a boom time for companies with export skills.”

On China, Joanne Denney-Finch, said: “China will maintain its position as the world’s biggest grocery market for the foreseeable future. Although the Chinese growth rate is slowing, it’s still very impressive, particularly in ‘tier three and four cities’. These are regional, medium-income cities, undergoing rapid development. There are many more opportunities for retailers and Western brands. For example, online grocery will enjoy explosive growth in China, though from a modest base, tripling in size between now and 2020. This will be powered by more Chinese having access to the internet through smartphones and other devices.”

On India, Joanne Denney-Finch, said: “While traditional stores will continue to take the lion’s share of the Indian grocery market, consumer spending per capita in real terms will grow faster in the subcontinent than in any of the top grocery markets. Combined with an expanding working-age population this will support the growth of modern convenience and supermarket retailing. Retailers are also rapidly setting up online grocery services hoping to tap into the potential of India’s half a billion smartphone users. Despite restrictions on foreign direct investment (FDI), international retailers continue to see the potential of investing in India.

“If the expected effects of inflation are stripped out, then India would be the fastest growing of the largest grocery markets while most of the MINT countries would also appear higher up the growth rankings.”

On the MINTs, Joanne Denney-Finch, said: “Nigeria is the fastest growing of all large scale grocery markets with a rapidly expanding economy, population and middle class. It does, however, face significant challenges such as the need to improve security and limited infrastructure in some regions.

“The other ‘MINT’ markets will also expand rapidly. Indonesia in particular benefits from a fast-growing and youthful population and there is a lot of focus on convenience stores to make the most of how this group shops.”