Andrew Carr is no stranger to nor fearful of change. He brings 25 years of experience in multiple technical and commercial leadership positions within IBM and from 2012 forward – continuing through his IBM division’s sale – in Toshiba’s retailing solutions businesses.

He has seen first-hand what problems and opportunities leadership and ownership changes bring to an organization. “Cultural differences are not as understood or appreciated as they need to be by senior leadership. There is a massive difference between the United States and Europe and even greater difference between the West and Asia.”  This realization will be very important as Cash Bases continues its adaptation from an independent UK owned and operated cash drawer design and manufacturing company to that of a part of the Minneapolis based APG Cash Drawer.

As Andrew takes over from Phil Stone who is moving into a custodial role as shareholder and board member, he reflects on what he found so appealing about the company he now heads. “Most organizations don’t live by the stated fundamentals that only exist in HR departments or in a chart here or there. In my conversation with Mark Olson (President of APG who ultimately decided to place his faith in Andrew) it was immediately clear that the company lives by its set of principles. We talked about these fundamentals that were driving the culture. One of these which really spoke to me is that ‘there is nothing like success to drive fun.’ This perspective is something that both companies shared before the integration and this will make going forward much more fun and more successful”.

For the leadership at APG it was this compatibility but also a drive and ability to perform which impressed - as told by Stephen Bergeron, VP of Marketing at APG, “He's got a level of enthusiasm to charge the process. You walk out of a meeting with Andrew and no matter how many action items there are on the table, he reassures, 'we're going to get through this and it's going to be a lot of fun'.”

Be that as it may, Andrew’s origin and the connections he brings with him must have been attractive for APG as well.  Considering his lengthy time in the product management and commercial channels of some of the biggest players in the sector, he is well positioned to offer support and direction for product development and the sales sides of the business. “What I hope to bring to it is the ability to take the leadership of this business to the next level. I can bring a lot of connections and I want to leverage those connections to sew us together more tightly with those various routes to market. These routes themselves bring a huge amount of value, skill and expertise to retailers.”

His company can immediately improve on certain aspects to achieve the potential he sees. “Most people think internally and I have to tell you that I am thinking externally most of the time. I want to think about customers, I want to think about partners, I want to think about ISVs. I'm not sure we are engaging them and leveraging them as strongly as we might. So my focus is to make sure that those partners who work and operate in the marketplace have a really good understanding of our technology, that we are very closely aligned – and alignment is a really key word that I'll be using throughout 2017 – of customers' needs, pains, offerings and value propositions.”

When speaking about the current problems faced by and the future of retailing Andrew moves away from speaking in terms of channels, payment systems or geographic differences. “I see customer experience and the enrichment of that as being at the forefront of the key change in the next five years. Retailers are realizing and are now changing the organization structure to focus on customer experience to drive loyalty, retention and return.” Stephen Bergeron continues, “Labor is a huge issue anywhere in the world right now. Pay scales are going up, the labor pool is diminishing at certain skill levels and that whole process is challenging retailers significantly.” He knows that a well built and properly selected payment handling system assists retailers in allowing better contacts with customers. “Most of the retailers who understand where their business issues are come back to us and say: you can help me with labor, you can help me with customer facing issues”.

Stephen and Andrew make it clear: It is becoming ever more apparent that consumers will always want and need a physical point of contact with retailers and brands as a part of the ‘experience’ of shopping and could even become more important as some of the purely online purchasing moves to click and collect or bricks and mortar. They believe that providing retailers with the tools to offer the consumer the greatest satisfaction will be key for retailers’ success independent of the who, what, where or when of actual transaction. An efficient and confident cashier is naturally an integral part of this.

While excited about the future, he admits to being somewhat daunted by the “realization of what it will take to begin to execute on this potential” but adds that “If my days weren't full and I was looking for extra work to do, then I would question that potential.” For the time being, it sounds like that potential is solid  as Cash Bases continues to fuse with APG as a global POS cash handling leader. 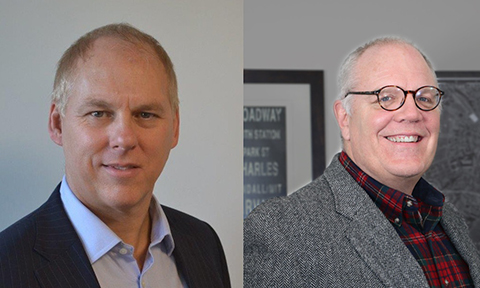