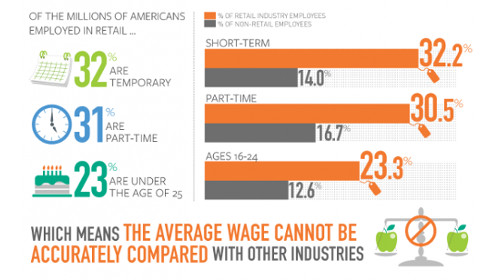 The National Retail Federation today released an in-depth study authored by a University of Georgia economist who found that retail jobs pay wages highly competitive with those in other industries despite long-held misconceptions to the contrary.

“The retail industry finally has definitive data to bolster the argument we’ve been making all along – that wages in our industry rival those of other industries when properly compared,” NRF President and CEO Matthew Shay said. “This report shows that careers in the retail industry are financially rewarding and that those who make a full-time career in retail can rise from entry-level positions to well-paid management and executive jobs.”

NRF released the Wages in the Retail Industry: Getting the Facts Straight report as part of Retail Jobs Week, its latest effort to educate Washington lawmakers about the value retail jobs deliver for millions of workers and the economy as a whole.

The study found that government data gives an inaccurate picture of core retail jobs because of the disproportionate number of part-time, temporary and young workers who are not as common in other industries. While those jobs are vital to the industry and provide flexibility sought by many workers, they result in lower averages when retail is compared against other industries.

“Government data on retail pay is skewed significantly,” University of Georgia Economist Jeffrey Dorfman said. “Once you create an apples-to-apples comparison, retail wages are clearly competitive with other industries and sometimes significantly higher.”

The main findings of Wages in the Retail Industry: Getting the Facts Straight include:

Download the full study: Wages in the Retail Industry (PDF)