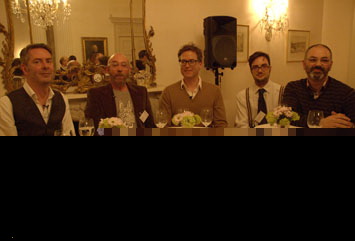 The store of the future: Online and offline experience must merge to maximise retail sales

Stores of the future will need to engage consumers, showcase the best of brands, tell authentic stories and embrace technology if they are to fight off the threat from e-commerce, guests were told at the Umdasch-hosted debate held in London last week. Speaking at the third Umdasch Shop Academy Forum in UK, which took place at the prestigious Austrian Embassy in London, keynote speaker Greg Stobbs, retail design director at Nike, said that the global sports brand had reengineered its famous NikeTown stores to serve a dual purpose in the face of online sales.

“When they were first created in the 1990s the idea was that they were brand showcases, regardless of sales achieved in those stores,” he reflected. “Over recent years they had moved more towards merchandising but the approach we have taken now is more of a balance, so the stores trade strongly but have also recaptured that sense of engagement and authentic sports story telling that was so important to the original concept.”

Stobbs also stressed that the days of multi-channel were outdated and that consumers now shop the brand, where each element of the retail and brand offer works together. “Bricks and mortar and digital need to borrow from each other’s strengths. Our store offer is influenced by digital possibilities and our websites have been given the personality and sports heritage that runs through our stores.”

In the subsequent panel debate, HMKM director Colin Melia stressed that store environments needed to be more engaging brand emporiums and reflected that a smaller number of stores seemed inevitable in the UK as retailers focused on their prime retail locations. “Those larger stores really allow a retailer to express its personality,” he said.

Portland managing director Ibrahim Ibrahim added that the huge recent advances in technology had redefined the way that consumers approached buying and he said that terms like 'technology' were themselves outdated. “We have to approach this with a new way of thinking, younger consumers don't think of what they are buying and how they are buying it in terms of technology, for them it's natural,” he insisted.

Retail Week Stores editor John Ryan concluded that retailers need to take greater advantage of the elements of their brand that add entertainment and theatre to their offer, contrasting the approach taken by Hotel Chocolat compared with the current plight of Thorntons. “Obviously not every brand has as enticing an opportunity as chocolate making,” he reflected. “But look at the difference between those retailers which leverage what they have and those that don't. It is not just about store design, it's about retail performance.”