The perfect labor storm is brewing for retailers 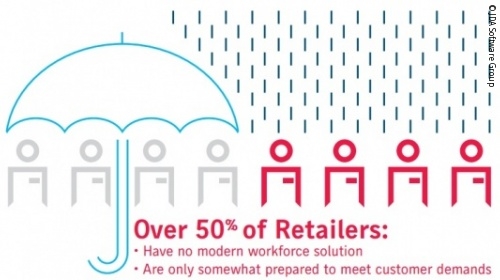 Amid ever-expanding customer needs, increasing complexity and new and shifting labor regulations, retailers find themselves facing greater challenges than ever before when it comes to managing their workforce.

The new JDA Voice of the Store Associate Survey of more than 250 U.S. store managers by JDA Software Group, Inc. revealed that half of retailers surveyed are not prepared to meet new industry challenges and many aren’t enacting changes quickly enough to keep up.

The survey found that 52 percent of respondents have not yet incorporated a modern Workforce Management (WFM) solution into their planning process and continue to rely primarily on outdated forms of scheduling, like pen and paper, a whiteboard and or an Excel spreadsheet. These antiquated scheduling solutions likely contribute to more than 50 percent of respondents admitting to feeling only somewhat prepared to staff appropriately to meet customer demands. Despite not feeling well prepared, nearly 50 percent of respondents also reported they have no plans to replace their current workforce solution.

“We thought the findings of the recent JDA Voice of the Store Associate Survey were shocking. The research raises serious questions as to how much attention retailers give to managing their staff efficiently, predicting customer demand needs and complying with new or pending labor regulations,” said Tyler Owen, senior director, Global Solutions Strategy, Store Operations, JDA Software.

Retailers blown off course from complying with pending labor laws

State and federal agencies are proposing and passing new labor laws that will have a direct effect on how retailers manage and pay their staff members. For example, the Department of Labor has proposed an update to the Fair Labor Standards Act (FLSA), which would raise the minimum salary threshold required to qualify for exemption from minimum wage and overtime requirements, affecting a proposed 4.7 million workers. Ending on-call practices and promoting fair, predictable schedules are at the center of some recent state and city regulations, including from the San Francisco Worker Bill of Rights, Hours and Scheduling Stability Act of 2016 District of Columbia, New York’s Attorney General Office and the City of Seattle’s predictive scheduling bill.

While raising minimum wage (61 percent) and the Affordable Care Act (53 percent) were reported as having a major effect on retailer’s labor costs and procedures, the Fair Labor Standards Act and pressure to end on-call were seen as having a small or no effect on operations by 61 percent and 65 percent of respondents, respectively.

While the majority of retailers offer Buy Online Pick up In Store (BOPIS) and Buy Online Return In Store (BORIS) as fulfillment services to customers, around half also offer Buy Online Ship From Store and Buy In-store Ship to Home offerings. These additional fulfillment offerings are only going to increase in future months according to respondents, with additional staff needed to be trained and allocated to support growing customer demands.

Home improvement retailers, which have been seeing strong quarterly earnings, were most likely (57 percent) to feel prepared to predict the need for additional staff for increased customer demands. They were followed by apparel/home goods (57 percent), grocery stores (54 percent), and big box stores (45 percent). On the opposite end, sporting goods retailers, many of which are struggling with earnings and closures, were most likely to say that they only felt somewhat prepared (73 percent) and were using additional technologies to support their current WFM solution.

“I believe we are in yet another major retail disruption of the 21st century. The first was the smart phone, the second was the rise of fast fashion, and the third very important one is the rise of the millennial. A perfect storm has been brewing for quite some time as these three forces are aligning to force change in the retail store profitability model, and many retailers are still struggling with how to respond,” said Paula Rosenblum, managing partner, Retail Systems Research. “For instance, some retailers raised worker base pay, but then reduced the total number of hours available, which put them right back where they started. The bottom line is that payroll is going to have to become a larger percentage of sales, and retailers need to find a way to segment workforce into routinized task managers and customer-facing employees. Only then will sales start to rise, almost as a trailing indicator, rather than a leading indicator.”

JDA conducted a survey of 252 retail managers in March 2016. Access the infographic from the JDA Voice of the Store Associate Survey here to learn more.