The designers behind Big-Game have kicked off 2011 with the premiere of three new pieces, currently on exhibition. 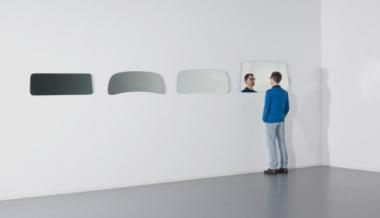 The POD lamp is a cone-like lamp that beams light vertically from the gound upwards, allowing for indirect lighting. It is made of a single piece of machined aluminum, the same material used for the newest Apple laptops. It is currently on display at the L'ECAL à Paris New Generation of Lights exhibition, until 15 February at Galerie kreo.

The FLAT mirrors are windshields from cars with flat windows, like the Citröen 2 CV, Fiat Panda, Renault 4L and Volkwagen Beatle. They have been silvered to create a mirror effect. The FLAT mirrors will be on display until 12 February at the L'ECAL à Paris exhibition in the Cité Internationale des Arts.

Finally, the FLOORS shelves are a self assembled shelving system made from aluminum profiles and ash wood. They have been awarded the Swiss Federal Design Award.

‘We are inspired by everyday objects, like things that are considered “standard”.’ says de Martinville. ‘Also we are inspired by industrial production techniques and a child-like imagination.’
The FLAT mirrors have been made from car windscreens.