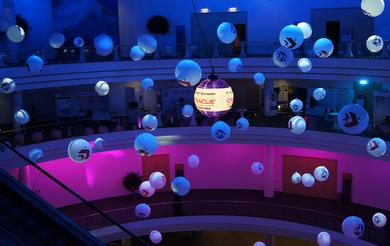 ARTMOS GmbH lights up the world: with its LED-Show and the LE3D-Globe, the lighting manufacturer from Dortmund offers two brilliant products to enhance the world of marketing.

In the LED-Show, two actors deliver a tongue in cheek performance that communicates the client’s message on two LED displays. Several teams of actors present this enthralling and intriguing show around the world. Buzzwords, company values, new product names or simply a logo are communicated in a catchy manner, leaving the spectators captivated.

Launched 7 years ago, the LED-Show has received numerous awards. The originator of the LED-Show, Wolfram de Bruyn, is a German Master of Magic. The show won the award of “Innovative Show of the Year 2012” in Germany. In Switzerland it was named “Light Show of the Year”.

The second mainstay of the lighting artists from Dortmund is the LE3D-Globe. A number of these globes of various diameters adorn a variety of objects all over the world. In Amsterdam, an “illuminated globe” bearing more than 390,000 LED chips has been a feature of the foyer of the Vodafone Group’s head office since 2012. Its pulling power extends across the entire forecourt. The novelty is that visitors are greeted by name via the globe.

So what does the LE3D-Globe offer? It can show customised animations using remotely controlled software. Company targets, logos, products, films and images can be displayed on the surface of the globe. The three-dimensional effect casts a spell on the observer and creates a source of fascination. This makes the message more eye-catching, ensuring that it stays in the memory for longer. Messages are communicated in an artistic and informative manner. This unique quality radiates a huge power of attraction.

ARTMOS is already a company that exudes enormous charisma with its LED performances and installations. In 2013 the title “Kultur- und Kreativpilot Deutschland” (“Cultural and Creative Pilot, Germany”) was bestowed on the company by the Cultural and Creative Industries Initiative of the Federal Government.