Stachus – lit up safely and in style 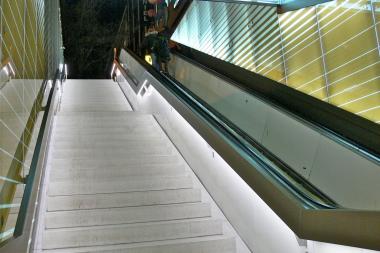 For decades, OSRAM’s former slogan – “Hell wie der lichte Tag– As bright as broad daylight" has been gracing the facade of buildings at Munich's Karlsplatz roundabout. Now the light manufacturer is also represented in the underground area of this bustling city-centre square, in the form of its subsidiary OSRAM Opto Semiconductors: the challenge was to implement the lighting concept in the entrance area of the newly redesigned station (for the S-Bahn suburban network and U-Bahn city metro). Schmidt-König, planning office for lighting, and light experts LI-EX constructed their plans based on LED from the Regensburg-based semiconductor manufacturer. The result is a Stachus with brilliant illumination and a low requirement for maintenance resources.
Since June 2010 the entrance area of the S-Bahn and U-Bahn station and the "Stachus Passagen" at Munich's Karlsplatz has been reconstructed; in this process, a new lighting concept has been put into effect. In its project management capacity, the Munich-based Schmidt-König planning office for lighting decided for several reasons in favour of using the LED lighting solutions provided by LI-EX, the Regensburg-based lighting specialist. It was particularly important for Michael Schmidt and the team to get good longevity of the lamps, to keep service costs low. The lighting technology used also needed to save space and, at the same time, provide high output with defined light-radiating characteristics.

65,000 LEDs deployed
In the course of the eleven-month refurbishment project beneath the Stachus, a total of 65,000 LEDs sourced from OSRAM Opto Semiconductors were installed into the LI-EX profile. The latter is characterised by its flexibility: the distances between the LEDs are freely selectable, and lengths ranging up to three metres can be supplied.
Two different LED types were installed in the process: for the facade lighting and for the architectural upgrading of the entrance area, as well as for the backlighting of a bronze-colored glass facade, 15,000 cold-white Golden Dragon Plus LEDs were used. They supply a bright and even illumination, without scattered light or dazzle, and with low power consumption. An additional factor is the good color
rendering index of the LED light sources: this provides a natural color impression and thus a higher level of safety, due to a more clearly contoured environment.
The handrail, 700 metres long in total, is illuminated by 50,000 warm-white TopLEDs. The LI-EX profiles are outstandingly suitable for this application: as the stairs in the entrance area are different, the length of the luminaires also needs to be adapted individually: for this type of luminaire, this is not a problem.

Efficient light effects
For construction reasons, the stairs were only able to be illuminated via the handrail – however, the latter was supposed to brightly illuminate the whole surface of the steps. As the lighting for the stairs also simultaneously serves as emergency lighting, powered by a battery in the event of a shutdown in electricity, the need was for lamps with low power consumption: thanks to TopLED, 18 metres of handrail illumination requires a mere 100 Watt. In this way, the project in the underground area at Stachus saw the realisation of not only an optically appealing, but also an energy-efficient lighting concept.
The glass facade presented another challenge. Here, there was a need to guarantee an even back-lighting with a high level of brightness and without visible LED light points. However, the short distance between wall and glass facade made challenging demands, both on the light-radiation characteristics of the LEDs and on the interplay with the external lens. Nevertheless, the LED profiles from LI-EX were able to meet this precondition: "The LED profile sits below at the glass wall and needs to supply a homogeneous brightness across several metres, despite the stray power due to the glass area. For these conditions, the highly-efficient, compact Golden Dragon Plus LEDs are ideal", notes Marco Friedrich, chief executive of LI-EX.
Thus visitors to Munich’s Stachus reap the benefit of an efficient lighting solution, merging style with safety.
The refurbishment of "Stachus Passagen" has been in progress since 2007, the project’s client is the Landesbank Baden-Württemberg. The architectural aspects of the project are run by Allmann Sattler Wappner Architekten GmbH, whose concept convinced the decision-makers during the initial architectural competition.
LI-EX is a part of "LED-Light for you", a network for lighting technology, initiated by OSRAM, which works jointly with customers on implementing new solutions based on the efficient and multi-faceted light diodes; since the launch of the Stachus project, the network has been providing specialist advice to the architects, Allmann Sattler Wappner. You will find further information on LI-EX and the network at: www.ledlightforyou.com.