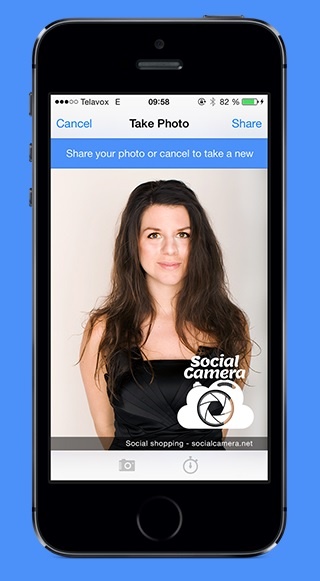 Software developer, Softbox AB, has partnered with Axis Communications, the global leader in network video, to develop Social Camera, an application designed for retail shops and boutiques. Social Camera is an application for smartphones that allows retail store customers to take photos of themselves trying out different outfits.

Instead of taking cumbersome pictures of themselves with their smartphones, customers can now use a wall mounted Axis camera to take the photos, rather than using their mobile phone at difficult angles. The Social Camera app will display a live video stream from the Axis camera on the customer's smartphone. With a simple tap on the phone, a picture is taken. It can then easily be shared to preferred social media networks.

The benefits are that the customer can now easily take photos of themselves from any angle with a high-definition camera that allows taking better looking photos than using the built-in camera on the phone.

The application is downloaded to the smartphone by scanning a QR code close to the camera. The phone will then instantly connect to the Axis camera and a live stream will appear on the display. With a simple tap on the display, a still image is taken and the picture is stored in the phone.

The retailers can embed their logo and a short message in every photo taken. Every image taken by Social Camera will include the retailer's logo and message. In addition, retailers can gather statistics on numbers of customers trying out outfits and map it by location.

The Social Camera application has currently been developed for Android and iOS-based smartphones and works with any network camera from Axis Communications.

"The Social Camera is a new and innovative way to share photos to social media in a retail environment, benefiting both consumers and retailers," says Lars Lindholm, Managing Director at Softbox AB.

"This is another great example of how Axis Network Cameras can be used for more than surveillance in stores. Since the application is embedded in the Axis camera, it's a standalone solution separated from the store's IT system," says Johan Åkesson, Director Business Development Retail at Axis Communications.