But savvy shopping here to stay 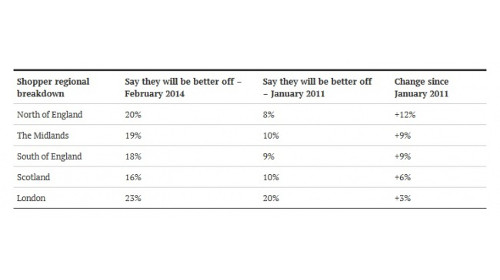 Nearly one in five shoppers (19%) say they will be better off in the year ahead, which is the highest level since January 2011, when only 10% felt this way.

That’s according to research published today (Tuesday) by IGD ShopperVista, which also reveals that confidence is increasing most rapidly outside London.

Although shopper sentiment is improving throughout the UK, people remain cautious and ‘savvy shopping’ habits picked up during the recession are still popular.

When asked what their main priorities are for their grocery shopping in 2014:

“While London shoppers remain the most confident about their personal finances, optimism appears to be spreading beyond the capital, with those in the North of England reporting the highest increases in confidence.

“However, worries about increases in utility and fuel bills, and wages not keeping up, mean shoppers remain cautious. ‘Savvy shopping’ techniques developed during the recession are here to stay and are seen by many shoppers as common sense. They include shopping around to get the best value or meal planning to reduce food waste.”