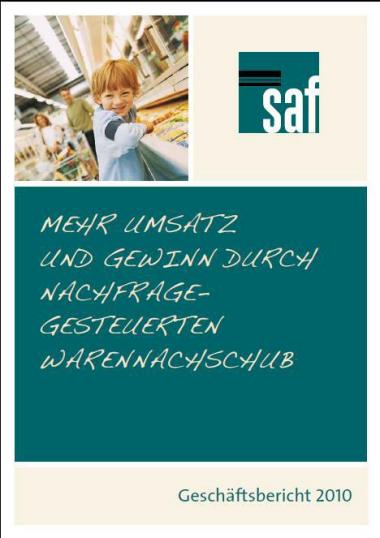 SAF AG, which is listed in the Prime Standard of the Frankfurt Stock Exchange (ISIN CH0024848738), announced consolidated revenues of EUR 15.6 million in the fiscal year 2010, representing a 5.9 percent decline in revenues year on year (FY/09: EUR 16.6 million). In contrast, consolidated net profit doubled from EUR 0.7 million to EUR 1.4 million. The strong growth in consolidated net profit was due primarily to the absence of one-off expenses incurred in the course of SAP AG's public takeover offer in 2009 which reduced the results of the fiscal year 2009. Accordingly, operating profit also rose from EUR 0.6 million in the previous year to 2.0 million in 2010.

After starting out the fiscal year 2010 with the successful signing of a licensing agreement with Germany's leading furniture discounter ROLLER and the license expansion of one of the leading US supermarket operators to include all of the group’s supermarket chains, the licensing business’ weak performance in the second half of 2010 dampened SAF's growth. At EUR 4.8 million for the year, SAF's licensing business lagged significantly behind the previous year’s level (FY/09: EUR 7.0 million).

Although OEM partner SAP made a substantial contribution to licensing revenues with nine licensing agreements, it was not as successful as it had been during the fiscal year 2009. The decline in the
licensing business was due primarily to a significantly weaker fourth quarter, in which an expected major
U.S. licensing deal fell through.

The maintenance business continued to grow in 2010, increasing 10.9 percent to EUR 8.9 million. The services business also showed positive development, recording a 23.7 percent increase in revenues from EUR 1.6 million in 2009 to EUR 1.9 million in 2010. The growth in revenues was fueled primarily by the closer alliance between SAF and SAP. For example, SAF was able to perform proof of concept analyses to pinpoint the financial added value of SAP’s F&R solution, thus convincing customers to purchase the solution. Additional development orders for the OEM partner and consulting projects for SAP F&R customers also made a substantial contribution to driving strong services revenues.

"The fiscal year 2010 was marked by many changes including the replacement of management, a closer cooperation with majority shareholder SAP and a realignment of our strategy," remarked Udo Meyzis, CEO of SAF AG with regard to the past fiscal year. "We have thus laid the groundwork for SAF's continued success and can fully exploit the synergies resulting from our intensified partnership with SAF going forward."

Thanks to future investments in enhanced software solutions for automated replenishment and the support of an established parent company, SAF is ideally suited to leverage innovative products and increase its share of the growth market for IT-driven replenishment management and to provide optimal support to customers in mastering the challenges they face with respect to the ordering process.