RotoShelf Multi patent approved in the US. 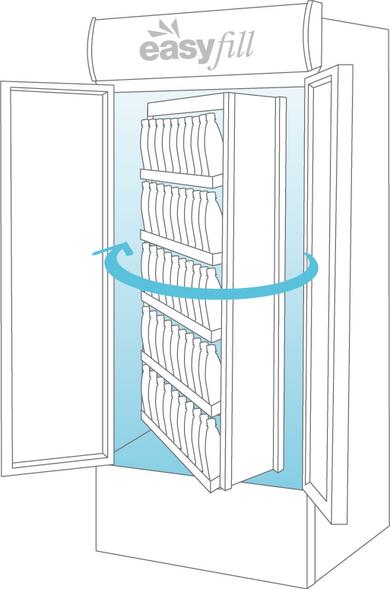 EasyFill AB (publ) has now received its first U.S. patent, the patent in this case is for our product RotoShelfTM Multi.

EasyFill is moving our positions forward. In the summer of 2013 it became clear to us that we were going to receive a U.S. patent on RotoShelf TM Multi. The joy and satisfaction in the management was tangible as it is a great success for all businesses, regardless of size, to withstand the incredibly harsh scrutiny of the United States patent office. We have now received the written confirmation and the official green light and we can therefore publish this news.

The U.S. has lots of shelves and various types of coolers with goods that are needs to be fronted. Knowing how difficult it is to refill the shelves from the front, and having the perfect solution for it with our patented RotoShelf TM Multi, to obtain the patent in USA is incredible.

CEO comment:
What happiness and what a great success!
When I, together with our marketing manager Jens Nisu, exhibited at the trade show in Dallas in spring 2012, we were told by more than one key player in the U.S. that we were never going to be able to get a patent by ourselves, but that we had to ally ourselves with a major company in the USA. After discussing with AWA patent we decided to continue despite the advice we got, since if cooperating with only one company in the industry we were forced to relinquish the part of the market kept by the their competitors.
After our decision, AWA patents representative in the United States started working to show the patent office in the US that it does not exist any similar product on the market and in retrospect we made the correct decision. Now we have a patent in the U.S. and now we can cooperate with all suppliers and get the whole pie instead of only a piece of it.