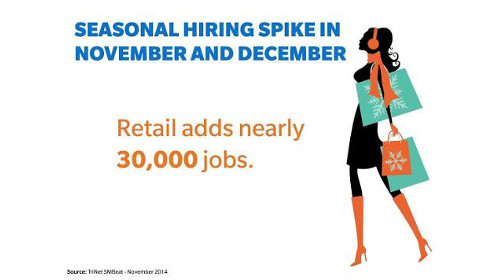 TriNet announced the findings of the November 2014 issue of its TriNet SMBeat, a monthly analysis of small to medium-sized business (SMB) employment and human capital economic indicators. November's report features an in-depth look at the retail sector.

Based on an analysis of various job market indicators, the November report forecasts that the U.S. retail sector will add nearly 30,000 jobs through the end of December as the country heads into a strong holiday shopping season.

According to the report, recent job growth in the U.S. retail sector is built on positive consumer confidence, increasing retail spending, and positive job market outlook. Though consumer confidence has been unstable much of the year, the report's findings show that improvements over the past few months, due to favorable job market and business conditions, will give way to increased spending power among holiday shoppers. Retail sales, jobs and housing data all point to healthy gains.

Recognizing the need to keep household budgets in line, shoppers will be extremely price sensitive as they have been for quite some time. Even though consumer income and spending have only moderately accelerated this year, there is room for optimism this holiday season. Overall, consumers are in a much better place than they were this time last year. The extra spending power could translate into solid holiday sales growth for retailers.