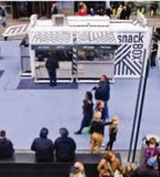 The original store design competition, now in its 42nd year, attracts the best of the best in Store Design worldwide. The industry's only totally peer reviewed competition, managed by each chapter in turn. An average of over 200 international entrants vie for top awards.

Winners of the 2012 competition, including Store of the Year, will be announced at a special banquet and awards ceremony to be held in January 2013, concurrent with the National Retail Federation’s annual convention in New York. Winners of the 2012 competition will be showcased in Stores of the Year No. 19, an 8.5 x 11, hardcover book which will be published by RSD Publishing in May 2013.