Q8 in Denmark installs fog cannons at all their service stations 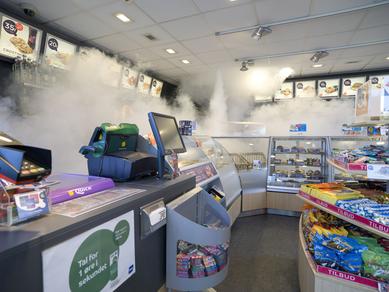 The number of break-ins to steal cigarettes and cash at Denmark's service stations increased dramatically in 2008. Q8 reviewed the problem and reversed the trend by installing fog cannons to protect their valuables. Today, the easily transferable goods are cloaked in dense fog in case of burglary. And now thieves do not even bother trying.

"In 2008, we had a large number of burglaries, and that figure increased in 2009," explains Klaus Peiner Thomsen, who, as operations consultant for Q8 Service Stations in Denmark, continuously works to optimise operations 24/7.

The thieves had a preference for cigarettes and cash, and they would gain entry by breaking through either the front or back doors of the service stations. Once they were in, they would break into or force open all the cabinets and rummage through them. Q8's facilities already had conventional burglar alarm systems installed, so they discussed further protection options with their alarm installation contractors, who recommended the Protect Fog Cannon.

"We decided to install extra security in the form of fog cannons primarily in the convenience store and stockroom areas in the service stations at greatest risk. Initially, we did not see a reduction in the number of burglary attempts, but then rumour started to spread that our service stations were blanketed in a dense fog in case of burglary, and that helped. Now, we can clearly see that we have reversed the trend," says Klaus Peiner Thomsen, adding:

"One minute after thieves gain entry, visibility is reduced dramatically, so they can't proceed."

After installing fog security units in high-risk areas, Q8 is now in the process of upgrading all their other service stations.

"We cannot accept the loss of our valuables, so, we are forced to protect them. And since it has become common knowledge that we have fog cannons installed, we register only minimal or no losses. So the product and the security units work," explains Klaus Peiner Thomsen.

Dansikring Direct/Securitas Direct is responsible for security at all Q8 service stations in Denmark.

"Service stations are often out-of-the-way buildings filled with the most easily transferable stolen goods - money and cigarettes. So, we are also seeing increasing numbers of fog cannons being installed in other countries as well. And luckily, with the same positive results that Q8 has achieved in Denmark," concludes Poul Dalsgaard, Managing Director of Protect, who is pleased to add that Shell, Esso, Aral, Jet and many other companies worldwide have chosen to install Protect Fog Cannon units.