Despite this growth, technology continues to hold the sector back 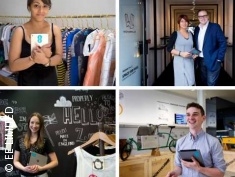 Pop-up retail is now worth £2.3 billion to the UK economy according to Britain’s Pop-Up Retail Economy, the second annual report into the pop-up sector from Centre for Economics and Business Research (Cebr).

The report, commissioned by EE, found that pop-ups now account for 0.76 per cent of total UK retail turnover, up from 0.6 per cent the year before, an increase of more than £200 million in sales.

The Cebr report found that the sector is growing much faster than predicted, with 12.3 per cent more revenue this year versus 8.4 per cent last year, caused by a rise in the number of customers and an increased average spend. 44 per cent of respondents have visited a pop-up in the past year, and they’re spending £8 per month more than they previously were at an annual total of £124 per person.

Britain is now host to more than an estimated 10,000 pop-ups, according to the report, and the sector employs more than 26,000 people. The lines between pop-ups and traditional retail are increasingly blurred, as well-established retailers and online-only brands are using pop-ups to test and expand into new locations and product lines. Eight per cent of retailers report having launched a pop-up sometime in the past year, while ten per cent plan to open one in the next five years.

However, barriers still remain. Obtaining a reliable internet connection remains one of the biggest challenges, and is crucial for point-of-sale (POS) devices, stock management tools and for real-time customer promotion via social channels like Facebook, Twitter and Instagram. Additionally, in spite of the fact that card payments are projected to overtake cash within the ten next years, over 40 per cent of small retailers and food and accommodation providers say they are unable to process card payments. Additionally the report highlights stock management is increasingly a key challenge, particularly as retailers try to manage sales and inventory across online, permanent and temporary shops. 25 per cent of retailers say they have lost money because they don’t have sufficient stock management systems in place.

To help retailers overcome these challenges and to support the rapid growth the pop-up sector is experiencing, EE is launching EE Connected Retail, a new range of 4G products to help retailers run a smarter shop. From pop-ups to established retailers, Connected Retail provides businesses with a superfast 4G tablet, a contactless iZettle payments device and POS software Shopwave. Connected Retail can save retailers up to 80 per cent on traditional POS systems.

The first retailers in the country to use EE Connected Retail are the winners of retail space marketplace Appear Here’s Space for Ideas competition, who this week launch their two week residencies in shops across London. The winners include bespoke cargo bike builder Porterlight, avant-garde jewellery brand WonderLuk , ethical clothing brand Run&Fell, and The Mini Edit, a children’s online clothing brand. Each is receiving prime retail space in London for two weeks, Connected Retail from EE, advertising from the London Evening Standard and funds and design agency support to build their shops.

Mike Tomlinson, Director of Small Business at EE, said: “The pop-up sector is rapidly evolving, with pop-up shops now contributing £2.3 billion to the economy every year. The sector’s growth is driven by retailers and brands of all sizes using pop-ups to create new experiences, products, and locations for their customers. With Connected Retail from EE, we’re providing 4G connected products designed specifically to help temporary and permanent retailers be even more flexible and productive – getting them online quickly, and helping them to engage with customers via social media, take payments, and manage inventory.”

Rob Harbron, Managing Economist for Cebr, said: “Pop-up retail is continuing to become an increasingly viable platform for both people with new business ideas and for established businesses looking to engage with customers in new and innovative ways. Successful retailers increasingly need to offer customers the ability to shop when and where they want. As such, the flexibility of pop-up stores makes the format increasingly attractive. However, without appropriate investment in technology, efficiently co-ordinating a range of platforms is becoming increasingly challenging for businesses.”

Ross Bailey, Founder and CEO of Appear Here said: “This report highlights how important the pop-up sector is becoming to the UK economy. With so many traditional retailers using pop-up shops and so many pop-up retailers moving onto long-term rents, we should no longer be looking to draw a line between traditional retail and pop-up retail – it is all just retail. We're seeing brands and retailers from all backgrounds incorporate pop-up retail into their retail strategy. Since launching in 2013, Appear Here has grown by 500% year on year and currently generates £14m in request value per month, a number which is increasing month on month. This is a testament to the growth of the industry.”