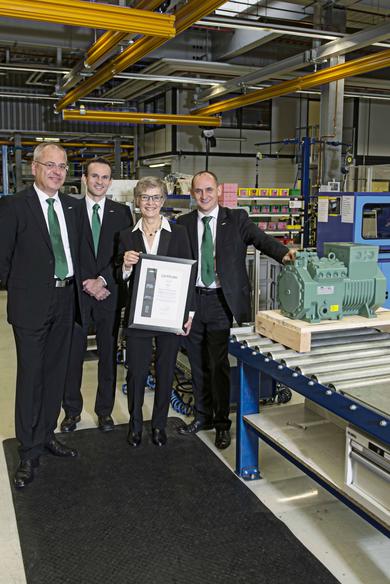 BITZER celebrates another milestone: the specialist for refrigeration compressors is proud to announce the production of the 100,000th NEW ECOLINE reciprocating compressor at its Schkeuditz plant. BITZER presented the compressor to its Polish trading partner Berling S.A.. Thus the new generation of the ECOLINE range is seamlessly continuing the success story begun by its predecessor.

"Our NEW ECOLINE has had a very good reception from customers and has quickly established itself thanks to its wide range of applications", proclaims Volker Stamer, Director of Stationary Products at a small celebration to mark the making of the 100,000th reciprocating compressor since the start of production as recently as April 2013.

"The latest products ideally meet market requirements. Their compatibility with predecessor models is a great advantage", stresses Hanna Berling, Chairman of the Management Board of Berling S.A.. Berling has been a partner of BITZER since 1992 and has been received the Distributor of the Year award on several occasions. BITZER developed the compressor at the international skills centre for reciprocating compressors, which is based at the Schkeuditz plant. To augment production in Germany, global production operations have recently been successfully launched at manufacturing facilities in China, the USA and Brazil.

With displacements ranging from four to 221 m3/h, the NEW ECOLINE series offers increased efficiency coupled with an increased range of applications, rendering it suitable for all standard refrigeration, air conditioning and heat pump technology. It makes an ideal replacement for existing equipment because there is no need to modify the mounting hole or change the pipe connections. BITZER has improved the efficiency (COP) of the entire NEW ECOLINE range by up to six per cent with medium temperature applications, and at the low condensing temperature which is important for the annual coefficient of performance by no less than 12 percent as compared with predecessor models.

The new compressor is highly versatile in its use. Apart from R134a, it is available with various other refrigerants, for instance R404A, R407A, R407C, R407F, R507A and R290 and R1270. Special compressors are only now needed for high pressure refrigerants such as CO2 (R744) and R410A. In applications involving R404A, the new range extends to the R22's application limit, being usable at temperatures up to Tc = 62º Celsius. With motor version 2 using R404A, evaporation up to 0º Celsius is possible. Thus all medium and low temperature applications can be operated using a single compressor type.

Another major advantage of the NEW ECOLINE series is the modern capacity control system. Reciprocating compressors are particularly suitable for speed control via frequency inverter, which improves system efficiency. In addition, all four-, six- and eight-cylinder models can be equipped with a highly flexible and efficient mechanical power control system.