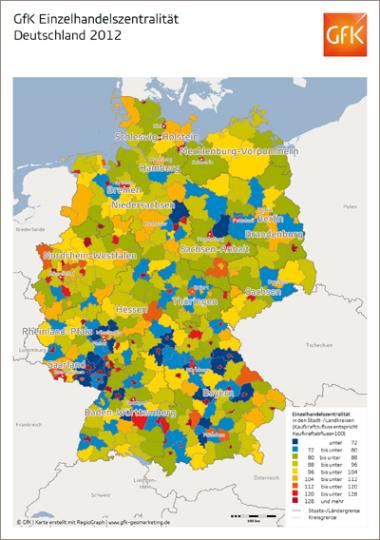 Germans' 2012 per capita retail purchasing power is €5,413. Where do they spend these funds? Usually not where they live, according to a new GfK study on 2012 retail centrality.

GfK retail centrality, Germany 2012 - GfK GeoMarketingThe forecasted 2012 retail purchasing power varies enormously across Germany, ranging from just under €7,100 in Hochtaunuskreis to approximately €4,500 in Eifelkreis Bitburg-Prüm. These values refer to the per capita amounts that consumers in these areas have at their disposal for retail purchases in 2012. The study predicts a nominal retail turnover of approximately €410 billion for Germany's stationary retail. This turnover is also very unevenly distributed, but in an entirely different way than the purchasing power. The conclusion: Consumers often do not make purchases at their places of residence.

The study "GfK Retail Centrality 2012" breaks down retail potential for all of Germany's regions, from federal states to districts and municipalities with more than 10,000 inhabitants. The study also incorporates retail purchasing power values and compares them to the regional retail turnover. This yields the retail centrality index, which measures the retail drawing power of a given region. Values more than 100 indicate an inflow of purchasing power, while values less than 100 indicate an outflow of purchasing power. A total of 158 districts have a centrality rating that exceeds 100, while 244 districts have a centrality rating less than 100. Differences in the distribution of values are even more pronounced at the municipal level.

Germany's stationary retail faces many challenges, such as competition from online shopping, notoriously spending-averse consumers, an uncertain future for the euro and rising transportation costs. It is more important than ever for retailers to know where customers shop so they can make more targeted investments in business sites and advertising.

Which regions have an inflow of purchasing power?

One notable result of the study is that large shopping cities such as Berlin, Munich and Düsseldorf do not top the centrality ranking. Rather, mid-sized cities such as Straubing, Weiden and Passau come out ahead due to their status as prime shopping locations for the surrounding rural areas. Beyond the boundaries of these cites, there are usually only limited and sparsely dispersed shopping options. These cities consequently profit from having large catchment areas with relatively high purchasing power. At the same time, these cities have only a modest number of inhabitants, meaning that the purchasing power inflow from the surrounding areas significantly exceeds the purchasing power located within the cities themselves.

The exception that proves the rule are large retail objects located beyond city boundaries, such as decentralized shopping centers and factory outlet centers that often attract shoppers from far afield. This applies in the case of tenth-ranked Zweibrücken district, whose high centrality rating is due to a factory outlet center.

The results show that retailers are wise not to neglect investments in business locations in mid-sized cities. At the same time, it is equally important to consider retail turnover as an absolute euro value, as this reveals where the bulk of turnover potential can be found:

Germany's top 10 districts alone comprise almost one-fifth (18 percent) of the nation's total stationary retail turnover of approximately €410 billion. Inhabitants of these large cities spend a sizeable portion of their purchasing power in their home cities. The amount spent outside of the city boundaries is overcompensated by shoppers and tourists from other cities. Centrality ratings for these cities range from mid-level values such as 106 in Berlin to high values such as 132 in Nuremberg. As such, retailers in Nuremberg draw an additional 30 percent of purchasing power from beyond the city.

With the exception of the most populated cities, inhabitants usually do not shop where they live. It's also common for people to shop in areas beyond the boundaries of the districts where they live - for example, in a neighboring mid-sized city, a shopping center or a large city quite some distance from their places of residence.

Information about where consumers with high purchasing power live is nevertheless valuable to retailers - for example, in order to plan business sites near places of residence or to carry out more targeted advertising. This information is provided by the GfK Retail Purchasing Power data, which is included in the centrality study.

Depending on the number of inhabitants in the region in question, even a difference of just a few points in the per capita purchasing power index influences the total demand potential in euros and consequently has a decisive effect on the regional revenue opportunities of retailers. Retail purchasing power is therefore a crucial benchmark for retailers.