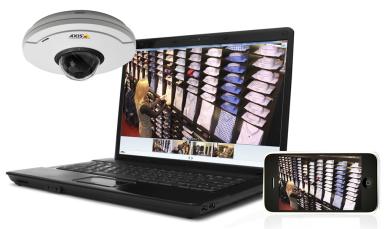 After the successful introduction of the award-winning AXIS Camera Companion, the leader in network video solutions has today announced a major upgrade of the free software client to further improve effective surveillance in retail environments. The new release includes new features such as audio, support for Public View Monitoring, Axis’ Corridor Format and video authentication.

“The first version of AXIS Camera Companion was well received by the market. Until August 2012 we have registered around 20 000 downloads of the software. This indicates that users really appreciate the simplicity and the superb HDTV image quality offered by AXIS Camera Companion,” says Peter Friberg, Axis’ Director of System and Services. “Based on input from customers and partners, we take the next step and introduce a selection of features that will add even more value for small business owners.”

The new version includes support for one-way audio to easily listen in on an area. The use of IP technology makes audio easy and affordable. A network camera with audio support sends both audio and video over the same network cable, removing the need for separate audio cabling. Another supported feature is Axis’ unique Corridor Format for effective surveillance of, for example staircases, hallways and aisles.

The new version also supports Public View Monitoring for loss prevention in retail environments. By downloading a third-party application to a mobile device the camera can stream live images to any standard monitor. To ensure that the video is accurately preserved for use as evidence, the new release also offers digital signing of exported material.

AXIS Camera Companion allows small business owners to use HDTV network cameras to help them clearly identify intruders, shoplifters and other incidents. Video can be viewed live and recordings played back from anywhere – onsite or remotely over the Internet. The system supports motion detection and pan/tilt/zoom control. Video clips and snapshots can be easily exported to colleagues and authorities, and the system supports third-party apps for viewing live and recorded video on leading smartphones and tablets, such as iPhone, iPad and Android.

No central recording in the application

Unlike analog surveillance installations, AXIS Camera Companion does not require a central recording device – a digital video recorder (DVR), network video recorder (NVR), or even a computer. All images are recorded onto a standard SD memory card in each camera, and the cameras keep recording even if the network fails. The cameras are powered over the network, eliminating the need for separate power cables. This reduces cost, simplifies installation, and makes the system more robust as there is no single point of failure. To further protect customers’ investments, existing analog cameras can be integrated via video encoders.