Mom-And-Pop vs. The Big Box: Both can win in emerging markets 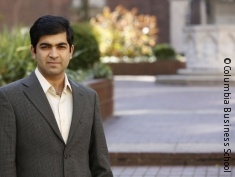 Kinshuk Jerath is the Class of 1967 Associate Professor of Business in the Marketing Division at Columbia Business School. His research is in the area of technology-enabled marketing, primarily in online advertising, online and offline retailing and customer management.

Over the past two decades, so-called "big box" stores have transformed the retail landscape in emerging markets, but not in the way many local store owners and policymakers had feared.

New research, partially funded by the Chazen Institute of International Business at Columbia Business School, shows that the arrival of organized retailing in developing economies has helped strengthen the network of mom-and-pop stores that still dominate the industry.

The paper, titled "A Model of Unorganized and Organized Retailing in Emerging Economies," is coauthored by Jerath with S. Sajeesh from City University of New York and Z. John Zhang, from the University of Pennsylvania's Wharton School, and explains in detail the symbiotic relationship between organized and unorganized retail.

The lure of a growing middle class, combined with increasingly liberal foreign direct investment policies, has helped pull international giants, such as Walmart and Carrefour, into developing countries. At the same time, homegrown conglomerates such as Big Bazaar and Reliance Fresh in India are on the rise, adding to the fierce competition within the retail space.

What wasn't expected, though, was that the surviving local retailers have benefitted from the market efficiencies that the big chains have implemented, such as access to more products and better distribution systems. With lower costs and less competition, the surviving local merchants can charge higher prices and enjoy higher profit margins.

Organized and unorganized retailers serve consumers in very different ways. An important characteristic of family-run stores is that they operate on an extremely small scale, serving households that live within walking distance. As a result, local shopkeepers are intimately familiar with their customers, and can maintain tight control over their inventory while offering highly personalized service to their customers.

On the other hand, while organized retailers can offer a wider variety of merchandise at lower prices, getting to the store often involves additional costs for the average consumer, including transportation expenses and the additional time needed to make the trip.

Another potential cost is that when products are bought in bulk instead of on an as-needed basis there's a higher risk that some of the product will go to waste, raising its per-unit cost.

Policymakers can use the insights gleaned from this research to help balance the growth of unorganized and organized retailing in emerging markets, Jerath says.