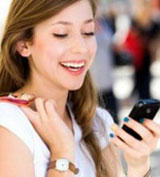 The forecast follows the latest results from the IMRG Capgemini Quarterly Benchmarking Index, which found that the percentage of sales through mobile devices rose to 11.6% in the second quarter of 2012, up from 8.2% in the first quarter.

IMRG said the penetration of mobile in terms of UK online sales has soared 2,900% since the beginning of 2010, rising from just 0.4% of online sales in Q1 2010 to 11.6% in the last quarter. Site visits through mobile devices also rose significantly in the second quarter, reaching 21.1% of visits to UK retail websites, up from 16.4% in the previous quarter.

The research also revealed that the visitor bounce rate for Q2 increased to 29%, the highest yet recorded in the two and a half years that the rate has been tracked by the Index. IMRG said that this suggests that consumers are becoming ever-more demanding regarding initial site engagement with the average bounce rate rising from 22% in 2010 to 28% in the year-to-date in 2012.

The results showed some positive signs regarding basket abandonment rates, as the average rate fell five percentage points in Q2 to 55%. Although basket abandonment has been falling, IMRG said the rate at which it is happening is only marginal and the overall level remains high. The average was 61% in 2010, 60% in 2011 and 58% year-to-date in 2012.

Tina Spooner, Chief Information Officer at IMRG, said: "While the share of online sales going through mobile devices continues to grow impressively, the actual final conversion side of it is only part of the story. Mobile has placed retailers, symbolically perhaps, in the palms of consumers’ hands, removing many former borders and expanding the contexts and times that engagement can happen.

"With the phenomenal growth seen in m-retail sales and visits, inevitably this also impacts the website visitor bounce rates, with fickle consumers easily able to compare and browse across multiple websites before completing a purchase."

Chris Webster, VP/Consumer Products and Retail at Capgemini, added: "The second decade of this century is will be viewed in history as the decade when the mobile device became the point of access to digital services. This has happened very quickly for commerce services and by the end of this year, 20% of all digital commerce transactions will be completed on mobile devices."