International trade is a major supporter of U.S. employment 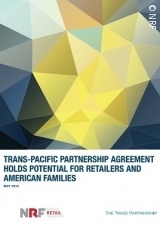 The recently negotiated Trans-Pacific Partnership trade agreement will have a positive impact on both retailers and American consumers once enacted, according to a new report released by the National Retail Federation.

“This report shows the importance of international trade to the U.S. economy and how TPP would create economic growth and opportunity in the United States,” NRF President and CEO Matthew Shay said. “Congress should move quickly to approve this agreement so American workers, consumers and businesses can begin to realize those advantages as soon as possible.”

The “Trans-Pacific Partnership Agreement Holds Potential for Retailers and American Families” report said that prices of imported retail merchandise are driven up considerably by tariffs, which amount to hidden taxes on consumers that can range as high as 67.5 percent on footwear or 32 percent on apparel, for example. Tariffs on goods from TPP countries totaled nearly $6 billion in 2015, and nearly all would eventually be eliminated after the measure is enacted, which would benefit consumers through lower prices.

The report found that international trade is a major supporter of U.S. employment, accounting for 6.9 million U.S. jobs in the retail industry.

“The TPP will have a significant positive impact on American families, workers and the retailers who seek to provide them with a wide range of goods at affordable prices,” according to the report, which was prepared for NRF by The Trade Partnership. “It will lower costs across global supply chains in the TPP region, and those lower costs will be reflected in U.S. price tags…. Families will benefit from greater spending power both from lower prices and higher wages.”

In addition to the economic value of eliminating tariffs, the report highlighted labor and environmental protections in the agreement that would be valuable to U.S. retailers.

“TPP will make it much easier for retailers to ensure that factories in TPP countries adhere to labor and environment conditions in their codes of conduct,” the report said, citing prohibitions against child and forced labor and protections for endangered species.