Ingenico Successfully Presented its Offer at the EuroShop 2011 Trade Fair 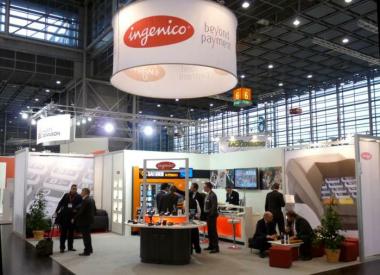 “A multitude of trade visitors have seized the opportunity to see our trend-setting solutions. Our automated retail concept proved to be particularly popular”, explains Marc Birkner, Managing Director of Ingenico GmbH. “This concept has enabled Ingenico to work together with the Media Saturn Group and the vending machine manufacturer Zoom Systems to break new ground in Europe. Indeed, the received feedback gives us reason to believe that this channel contains enormous potential. After all, the concept has already become part of everyday life in the USA and Japan.”

Innovations for the POS

Ingenico presented its current range of terminals, for example the iCT series just launched all over Germany. The company also provided an insight into its Development Division, indicating that the upcoming generation of wireless terminals will be smaller and lighter and users were impressed by their high-resolution displays. Integrated NFC reader modules will guarantee compatibility with contactless payment procedures by card or using smartphones and clearly represent the next stage of the evolution of the POS.

The combination of smartphones with payment terminals is also no longer just a vision. A prototype at the trade fair demonstrated the possibilities for secure card payment that are opened up by combining a smartphone and a fully-fledged payment terminal.

Automated Retail: A Future Version of the POS

The undisputed centre of attention at the Ingenico stand was a vending machine. Together with Media Saturn, the American vending machine manufacturer Zoom Systems and the payment provider easycash, an Ingenico company, a vending machine has been developed that can be used in the entire Eurozone thanks to international payment procedures. The machine, available 24/7, enables customers to purchase electronic goods using a cashless payment transaction with their credit card or Maestro debit cards. The Ingenico 9500 kiosk terminal facilitates this payment process. Although this channel has been tested a thousand times over in the USA and Japan, it is a first for Germany. The first vending machines have already been installed at different airports and stations in Germany and will be coming to Italy in the next few weeks.

With 2038 international exhibitors and around 106,000 visitors, EuroShop 2011 was the most successful trade fair in the event’s 45-year history.