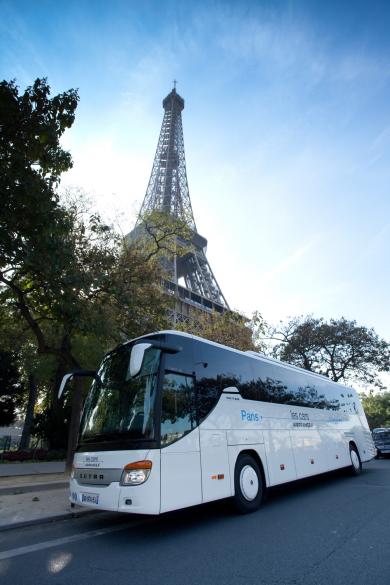 Hoeft & Wessel AG has received its first order placed in France. The bus company Les Cars Air France operated by Aérolis, a joint subsidiary of Keolis and Air France, ordered an innovative e-Ticketing system for its buses in service between the airports of Paris Charles-de-Gaulles and/or Paris Orly and the inner city of Paris.

The order placed by Les Cars Air France comprises 55 on-board ticket vending terminals with ticket printers of the successful almex.optima series from Hoeft & Wessel. In addition, the order volume includes the application software and integration into the back-office system. Rollout and installation will be carried out in two phases; initial delivery is scheduled for the end of 2012.
The final commissioning is planned for autumn of 2013.

This order will enable Les Cars Air France to have a modern and efficient ticketing system that will facilitate various forms of payment ranging from cash all the way through to credit cards. The system is based on the use of barcodes as well as a cloud architecture for the recording of fare tickets. For instance, the on-board terminals can accept both printed e-Tickets from passengers as well as tickets issued by commercial customers such as airlines and travel agencies or sales outlets of Les Cars Air France like hotels, tourism partners and tourism information providers. In future, it will also be possible to scan the tickets using a smart phone or tablet PC held up in front of the reader.

"What convinced us beyond the quality of the terminals was the modular structure of the Almex system and the ability of Hoeft & Wessel to adapt to our specific requirements," explains Fabrice Franck, Managing Director at Aérolis.

"This contract award represents the confirmation that we can perfectly adjust our ticketing systems to the requirements of the French transport market. In addition to bus systems, in France we also provide stationary terminals and special mobile ticketing terminals. I perceive a great deal of potential for our systems in France," says Michael Hoeft, CEO and founder of Hoeft & Wessel AG, who is delighted with this development.