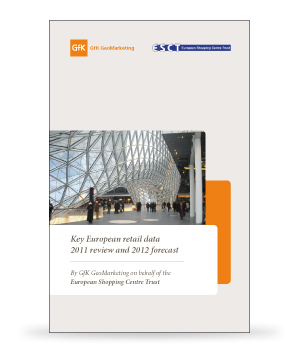 GfK GeoMarketing recently completed an analysis of Europe's retail scene. Conducted on behalf of the European Shopping Centre Trust (ESCT), the study was presented at the ICSC European Conference in Berlin on April 18-20.

Study on European retail in 2012 - GfK GeoMarketingGfK GeoMarketing has published a study on European retail in 2012. The data was compiled and evaluated on behalf of the European Shopping Centre Trust (ESCT). The study provides a Europe-wide overview of retail-relevant data. The study features evaluations of the following GfK data for all European countries, including Russia and Turkey: GfK Purchasing Power, retail turnover, retail expenditures as a share of the population's total expenditures, 2012 turnover prognosis, inflation rates as well as sales area provision and productivity.

"The retail scene in Europe last year was once again enormously eventful," explains Sebastian Müller, GfK retail expert and one of the authors of the study. "The differences among the individual European countries and regions were more pronounced last year than in previous years. Amidst the backdrop of the national debt crisis and the partially lingering funding shortfalls, the propensity to spend varied widely among the individual European countries."

Some results from the study:

With regard to purchasing power, the disposable income of Europe's households in 2011 has again climbed despite the current debt crisis and uncertainty concerning the economic development of the EU-27 countries. In 2011, approximately €8.5 trillion was available to European consumers in the countries under review for consumption-related expenditures. Eurostat's retroactive upward adjustment of the 2010 numbers for many countries yields a 2011 growth rate of +2.6 percent for the purchasing power of the EU-27 countries. The eurozone countries experienced a comparatively low level of growth. This makes it clear that primarily new member states, EU candidate countries and partner countries with above-average purchasing power boost the growth rates for Europe.

In the 32 European countries reviewed, retailers generated a 2011 retail turnover of approximately €2.96 trillion (EU-27 = €2.3 trillion). This led to an overall increase in the 2011 retail turnover in the 32 countries of approximately +2.4 percent compared to 2010. This is again indicative of a continuation of the positive trend discernible in recent years, although the pace of the trend has slowed somewhat compared to 2010. By contrast, the difficult economic situation in countries such as Greece (-14.2 percent), Portugal (-6.9 percent) and Spain (-2.0 percent) has dampened consumer confidence.

In the European countries under review, GfK GeoMarketing anticipates a nominal retail turnover growth of approximately +1.4 percent in 2012. It is also expected that the countries affected by the structuring and austerity measures - Greece, Ireland, Portugal, Spain, Italian and Hungary - will be impacted by the repercussions of the debt crisis; at -15 percent, Greece is anticipated to be hit hardest. With regard to the large economies and retail markets, turnover growth of approximately 1-2 percent is predicted for France and Germany. Growth of +2.7 percent is even forecasted for the UK.

Retail spending as a share of total private spending declined again in the EU-27 in 2011. Despite the retail turnover growth in absolute terms, the quota fell to 31.3 percent of consumption expenditures (previous year: 31.9 percent). At 33.6 percent, the quota for all European countries considered by the study is somewhat higher, but here a downturn is also apparent. The reasons for the declining share of retail expenditures are the same as in the previous years. The key factors in this regard are increasing energy costs and economic uncertainty.

In 2011, there was a nominal retail turnover growth of approximately 1.2 percent in the 27 EU countries. Once these figures are adjusted by the average inflation rate of approximately 3 percent, it's apparent that the actual retail turnover has declined somewhat. As such, the average inflation rate is higher than in 2010 (approximately +2.1 percent) and in 2009 (+1.0 percent). When combined with low interest levels, this leads to creeping inflation, a development that even has positive effects amidst the current debt crisis. For 2012, GfK GeoMarketing anticipates a slight trend reversal to a lower rate of inflation, which is expected to be several percentage points lower than in 2011 in almost all countries considered, with the exceptions of Switzerland, the Czech Republic and Hungary.

The per capita sales area in the 32 European countries under review increased by a total of approximately one percent in 2011 compared to 2010, although the situation from country to country varies significantly. This is explained by the fact that, on the one hand, many projects were halted during the crisis and, on the other, current vacancies can now be filled again. However, it should be remembered in the case of the per-capita evaluations that the population of all countries under review increased by +0.5 percent. In this regard, Lithuania, France, Latvia and Slovakia have the highest per-capita sales area growth rates. As such, the sales area growth rate is - as in the previous year - below-average compared to the 2011 turnover growth of +2.4 percent. The rate of the sales area increase has therefore once again significantly slowed, although GfK GeoMarketing anticipates that it will again accelerate considerably in the coming years.

"Particularly in those countries that continue to be affected by stringent savings measures, consumers' low expectations for the economic development of their country and salary increases occasioned a downturn in consumption, which in turn resulted in declining retail turnover," explains Manuel Jahn, co-author of the study. "On the other hand, individual countries such as the Baltic States actually experienced a significant turn-around in 2011; Russia is even on a course to overtake the top-three retail markets of France, Germany and the United Kingdom. A thorough knowledge of regional market relationships and the associated potential is an essential precondition of success for all retail decisions and endeavors. As a company with long-standing expertise in retail and location decisions, GfK GeoMarketing offers consultancy services to retailers, investors and real estate developers that promote sustained success."

About the study
GfK GeoMarketing's calculations of turnover and purchasing power were carried out in euros based on the average 2011 exchange rate for the related currency (as reported by the European Central Bank (ECB)). The press deadline for the information and data was the end of February 2012 (which means that the EU Commission's "European Economic Forecast Autumn 2011" was taken into account). The study was commissioned by the European Shopping Centre Trust (ESCT) and is available upon request from GfK GeoMarketing as a 12-page booklet.