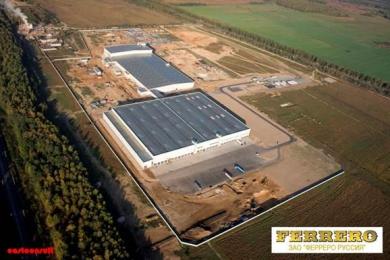 Food production today is not simply a business. In order to guarantee a globally comparable and accepted norm, the industry introduced the International Food Standard (IFS) in 2003 to support manufacturers and retailers in their striving for quality. One aspect of this standard is the protection of the production facilities, including surveillance of the exterior and interior premises.

As a result, the popular Italian chocolate manufacturer, Ferrero was in need of plant security when expanding its production in Eastern Europe and Russia. When its Russian subsidiary, ZAO Ferrero Russia, opened its first factory in Vorsha Sobinskiy, in the Vladimir region northwest of Moscow, one of the most crucial factors to address was the security of the highly sensitive facilities, where Ferrero produces its all-time favourite Kinder Chocolate and the Raffaello praline in an 80,000 m2 plant, and which created around 1,000 jobs.

A 24 hour access control and detection of suspicious behaviour were key requirements. Environmental influences, such as weather, lighting conditions or leaves, had to be excluded. Additionally, it was vital to have an expandable surveillance system, backed by video storage, as well as the ability to be integrated into the existing IP network.

The solution supplied by Bosch comprised cameras and storage capabilities, as well as intelligent analysis tools. In terms of cameras, 120 IP and analog cameras were installed to provide comprehensive monitoring, aligned using an encoder. The camera control is coordinated by the Bosch Video Management System (BVMS), equipped with four workstations and such features as the quick search function within video archives, making the operator’s work more targeted and efficient. In order to store video files, nine iSCSI arrays with a total capacity of 100 TB were installed.

For evaluating the recorded scenes, this surveillance solution is equipped with Intelligent Video Analysis (IVA) from Bosch, which offers the reliable detection of suspicious behaviour, such as unauthorized access to restricted areas, illegally parked cars or changing aspect ratios of objects. It also takes into consideration changing light and environmental conditions, such as rain or snow.

By combining several products and technologies, such as cameras, video analysis, storage capabilities, and a video management system, Bosch provided Ferrero with a comprehensive, integrated security solution that offers high-quality images, comfortable management, and a reduction in the total cost of ownership. Thus, Ferrero is able to produce chocolate of the quality that brands like Kinder and Raffaello are known for, and enjoyed by all generations in both East and West.