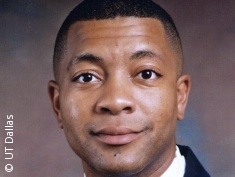 Dr. Orlando Richard is an associate professor of organizations, strategy and international management at UT Dallas and lead author of the study

The new study from the Naveen Jindal School of Management at UT Dallas merges two opposing views on diversity in the workplace, said Dr. Orlando Richard, associate professor of organizations, strategy and international management and lead author of the study.

Social identity theory predicts that diversity is negative because people can't identify with one another, while the information-based perspective argues that diversity is positive because it leads to more creativity. "We tried to find a context in which diversity within the organization would lead to more creativity and problem-solving, but the employees could also identify with the customers," Richard said.

"This way, both of the theories are working simultaneously, and you have the highest level of performance." For the paper, recently published online in the Journal of Management while in-press, the researchers collected demographic and performance data from a large retailer that operates more than 200 store units in small communities throughout the greater Midwest and West. They also used community demographic data from the U.S. Census Bureau.

"In that case, employees didn't have creativity and problem-solving skills because everyone's the same, and they can't identify with the diverse community either," Richard said. "So you had two negative implications working hand-in-hand." Richard said hiring managers should take a close look at the communities they serve as a way to have higher identification between employees and the community at large. "As communities become more diverse, it gives companies a broader pool to select from, but that doesn't mean that a hiring manager is going to hire people who are different," Richard said.

"They may have biases and continue to hire the same types of people, whether that be race, gender or age. They have to be proactive and be aware of the environment and also aware of what can be done within the company. If companies continue their same hiring practices and do not necessarily diversify their workforce, then it has negative implications for sales performance."

Dr. Marcus M. Stewart of Bentley University, Dr. Patrick F. McKay of Rutgers and Timothy W. Sackett of HRU Technical Resources also are authors on the study. Next, the researchers aim to explore fault lines that split employees into multiple groups -- such as age, gender and ethnicity -- and how they intersect to influence store-unit performance outcomes.

Source: University of Texas and Dallas