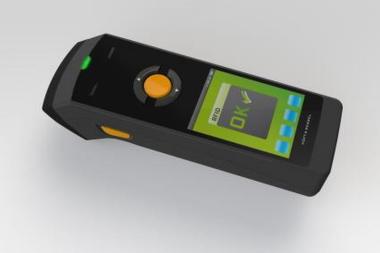 Hoeft & Wessel AG is in the process of developing a multi mode reader unit for electronic tickets for the Danish State Railway (DSB). As an external module, it enables e-Tickets on the basis of RFID, OCR and barcode technologies to be inspected using all handhelds.
As a first step, DSB plans to deploy about 1,400 devices for use by its train attendants. As a second step all other public transport operators in Denmark will follow suit and use the same device which henceforth per se will be a standard device in Denmark. The new development is the world´s first wireless extension tool for handhelds used for inspecting e-Tickets in long-distance passenger transport.

The background to the contract award is the inspection of e-Tickets for the nationwide e-Ticketing project "Rejsekort". In the process, Denmark has opted for a smartcard that is valid on all modes of transport. Jesper Frederik Gottlieb, project manager for the mobile inspection terminal at DSB, therefore does not only perceive the improved efficiency delivered by the project in daily operation: "Using the E-Ticket, we can offer our roughly 200 million DSB passengers each year a great deal more comfort, transparency and security. In this project Hoeft & Wessel is our partner for simple and efficient inspection of the new ticket by our train attendants." "Our solution is unique worldwide and will increase the acceptance of e-Ticketing systems," adds Thomas Wolf, member of the Board of Management of Hoeft & Wessel AG, responsible for the Ticketing division of the Almex brand.

To this end, Hoeft & Wessel itself has contributed a great deal of modern technology. As external modules, the multi mode reader unit acts as an extension for all handhelds that do not have RFID, OCR and barcode readers of their own. The lightweight system, which is simple and convenient to use, features a secure Bluetooth connection. Its easy operation and long operating life make it an effective module for the inspection of E-Tickets. At its core is a contactless card reader that scans tickets at lightning speed. In principle, the system can be deployed for all E-Ticket standards such as ITSO, VDV-KA and Calypso. What is special about it is that the system can also alternatively be used as a stand-alone solution and can optionally also be equipped with WiFi and NFC.

This is not the first time that DSB relies on the expertise of Hoeft & Wessel as one of the leading specialists for ticketing solutions: The state-owned company had ordered Almex brand ticket vending machines as early as 2004 and in the year 2010. At present, some 300 stationary ticket terminals are in use at DSB. Throughout Europe, there are more than 10,000 units installed. The company´s expertise in the field of mobile terminals speaks for itself: in over 30 years, Hoeft & Wessel has delivered more than 250,000 systems.