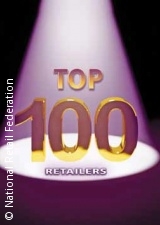 The nation’s largest retailers, as ranked by STORES Magazine and Kantar Retail, have collectively held their top spots thanks to one common denominator: a customer-centric, omnichannel focused business model.

The annual ranking of U.S. retailers by domestic sales is featured in the July issue of STORES Magazine. The report was sponsored by Island Pacific and NEC.

“The biggest retailers continue to get bigger because they embrace change,” says Susan Reda, editor, STORES Media. “Every one of the top companies maintains a razor-sharp focus on addressing shifting consumer behaviors and is embracing changes in technology – in particular the digital landscape. It’s an amazing time to be in retail.”

Wal-Mart Stores (1), The Kroger Co. (2), Costco (3), The Home Depot (4), Walgreen (5), Target (6), CVS Caremark (7), Lowe’s Corporation (8) and Amazon.com (9) have largely kept their spot in the top 10 in recent years, likely a result of their keen ability to connect with their savvy customers. Omnichannel strategies like buy online-pick up in store, direct-to-customer fulfillment, same-day shipping and mobile shopping have transformed the shopping experience and boosted sales in both physical and e-commerce spaces.

“Both the Top 10 and the rapid climbers in the Top 100 show a commitment to innovation in both the physical and digital worlds,” says Bryan Gildenberg, Kantar Retail’s chief knowledge officer. “For most of these retailers save Amazon, well over 90% of their business is still store-based, so omnichannel innovation needs to be integrated into the store and the online experiences seamlessly. In particular, innovations in format and store design, value communication and shopper engagement across all channels are key to growth and success.”

Several companies who’ve appeared on the list for the last few years have shifted rank. Wegmans Food Markets grew from 62 on the list last year to 57 in 2015; Missouri-based O’Reilly Automotive rose from 65 last year to 58 in 2015. Sherwin-Williams moved up seven spots to 68 and Dick’s Sporting Goods, whose sales increased 9.2 percent in 2014, moved to number 62 on the list from 69 the previous year.