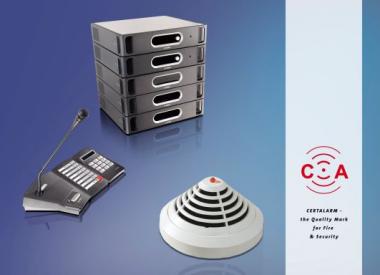 Two smoke detectors as well as the public address and voice evacuation system Praesideo from Bosch have been awarded the Certalarm quality mark. They are among the first products to receive this pan-European certificate which is endorsed by the European Commission to harmonize certifications in the fire and security industry throughout the European Union.

Certalarm is a not-for-profit organization which offers third party one-stop testing and certification of fire and security products, aiming to establish a single quality mark throughout Europe. It is based on tests by independent third party test laboratories against European standards – the EN 54 series for fire products and the EN 50131 series for security products.

The Certalarm scheme has been accepted by the European cooperation for Accreditation (EA) as a “Sector Scheme” under their rules. The Bosch division Security Systems is a leading global supplier of security, safety, and communications products, solutions and services. Some 12,000 associates generated sales of 1,36 billion euros in fiscal 2010. Protection for people's life, buildings and assets is the aim. The product portfolio includes video surveillance, intrusion alarm, fire alarm and voice evacuation systems as well as access control, management systems and care solutions.

Professional audio and conference systems for communication of voice, sound and music complete the range. Bosch Security Systems develops and manufactures in its own plants across the world.