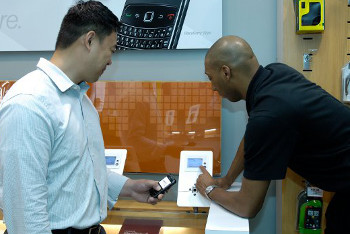 “Spectacular” store results across the group include 30% jump in same store sales, higher margins and a dramatic jump in merchandising conformity rates.

A European telecoms operator wanted to capitalize on its reputation for running the speediest network in its country by launching a paperless store concept designed to also make phone buying fast. Shoppers would use self-engaging tools to get all the information they needed on products, plans and prices, even before they started talking to sales staff. Rethinking their approach to wireless retailing, the telecoms team decided to place interactive digital displays beside each demo phone in the concept store planograms – removing the traditional paper labels.

The retailer tested the digital label concept with MicroSigns, and after a one-year trial, chose the company to carry out the full project and implement a complete solution across the retail estate. More than 125 stores were each equipped with 33 MicroPlayers – small color digital screens that display product information and all the prices related to monthly plans available for the adjacent demo handset. To catch the gaze of shoppers and entice them to use the screens, the retailer used short video sequences instead of conventional product prices and facts.

MicroSigns’ cloud-based software platform allowed the retailer to centrally manage the content to all the displays, using just a browser, and working with a product catalog and planogram tool. Variables such as prices were imported into the system daily, in a matter of minutes. With a few mouse clicks, store managers logged in to manage the planogram of their individual stores, and report the reasons for any planogram non-conformity to the retail team.

Every aspect of store performance was improved by the shift to the MicroSigns digital merchandising solution. Customers walking in the stores felt less intimidated by sales representatives. They liked the ability to find information independently on the MicroSigns displays. Sales associates found it was easier to approach clients that were already engaged and confident. The 33 MicroPlayers placed in each store were identified by customers as the best feature of the newly renovated stores.

Commercial results were tied to the new behavior of customers. On a sample of 50 stores:

The retail team described the MicroSigns management software as “just fantastic, “ noting how it allowed them to complete a full planogram cycle in less than four days - from planning to execution.

The conformity of the planograms in the stores went from 80% to 97%, confirming the buy-in of the store managers.