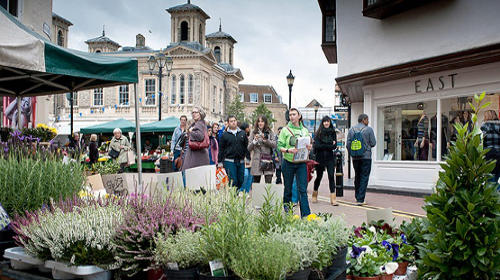 A study by Kingston Business School students has found a majority of local businesses would welcome the option of trying out a local currency, and that most are confident about their trading prospects for the next three years.

The Kingston Pound will go on trial in the Royal Borough later this year in an effort to boost the local economy. Brixton, Bristol and Totnes are just some of the places which have already converted to using a local currency alongside Sterling, while people in Hackney are in the process of creating their own version. There are also local currency networks in Europe and the USA.

The aim is to ensure that more of the money spent locally remains circulating in the area. The notes issued by local currency schemes are not legal tender, operating instead in a similar way to vouchers issued by businesses. They typically act as a method of pre-payment for goods and services to be provided in the future.

The research, which surveyed 53 local traders, found that 40.7 per cent were likely to get involved with a local currency trial. A further 39.5 per cent stated that they were undecided, while only two out of ten said they were unlikely to participate (19.8 per cent).

Cihan Negiz, a 31-year-old student from Istanbul who is studying for his MSc in International Business Management, led the team which carried out the research. "Our main focus was to try to understand the perspective of independent businesses in the borough so we asked whether they would be interested in such a project and what concerns they would have," he said. "Overall it was great to see a broadly positive response to the Kingston Pound idea because local currencies have taken off elsewhere. We are very interested in examining exactly how it will work in practice when it launches."

Organisers plan to run a pilot of the Kingston Pound as part of the Surbiton Food Festival between 3-18 May this year. The printed notes have been specifically designed for use by consumers and businesses taking part in the festival. Each will have a face value of one pound Sterling. The printed notes will have three forms of security on them, and those who commit to converting at least £20 into Kingston Pounds before the end of March 2014 will have their name incorporated into the design of the note.

The key objective of the local currency, Cihan explained, was to encourage consumers to purchase items from local businesses which, in turn, would buy goods and services from suppliers in the area - thereby boosting the local economy. "We were quite taken aback when 40.7 per cent of the survey respondents admitted that none of their products or services come from suppliers within the Kingston Borough," he added.

The students' survey also revealed a very high level of optimism among traders in Kingston with a majority (71.6 per cent) saying that they were confident or very confident about their business prospects for the next three years. Only 2.47 per cent of respondents said they lacked confidence. "These results might perhaps seem surprising in the current austere economic climate," Cihan Negiz said. "However, the majority of the businesses we questioned turned over less than £100,000 a year, so the results tie in with a number of recent national surveys which suggest that small business confidence is continuing to grow in the UK."