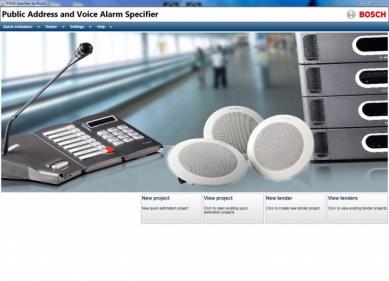 With the launch of its Windows-based specifier software, Bosch is supporting planners and consultants in developing any type of public address or voice alarm project. Initially available in English, the program allows for the simple creation of tender specifications for medium to large projects.

In addition, it enables users to generate a bill of material that not only lists the central equipment used, but also an estimation of the loudspeakers required in the various application zones, as well as a calculation of the rack space and back-up power needed.

For added ease-of-use, the new software offers simple navigation, clear terminology, and help with jargon all integrated in the user interface. Users are guided through all the stages necessary for generating the output tender and bill of material in seven straightforward steps. Starting with a general selection of the standards that need to be complied with, followed by project-specific information on audio zones, workstations, central equipment, and interfacing with other systems. The program even helps with voice alarm norms by way of clear explanations of the mandatory standards, including the European voice alarm EN 54, EN 54 sub-standards, and EN 54 clauses.

In addition, those users seeking to determine the correct loudspeaker for an audio zone but who are unaware of the quantity needed and background noise levels in such applications as railways, office buildings or libraries can rely on the information provided by the built-in knowledge database. Once the application type has been selected, the program generates a list of the most suitable loudspeakers and suggests the required amount.

Furthermore, the software supports the requirements for integration with other systems typically found in such applications, such as flight information, building management or fire alarms. When this option is set, the draft tender is updated with the specifications for the connections and integrated solution.

Finally, users can customize the tender documentation by adding or deleting parts of the standard template and by creating their own tender texts. Customer data can be imported directly from Microsoft Outlook, while company logos and contact information can also be added. What makes the tool particularly attractive is the fact that it is easy to use and intuitive, thus saving planners time and money when creating tenders and material lists.

The new specifier software will be available in EMEA (Europe/Middle East/Africa) markets from July onwards. It can be downloaded free of charge from the local Bosch Security Systems country website.