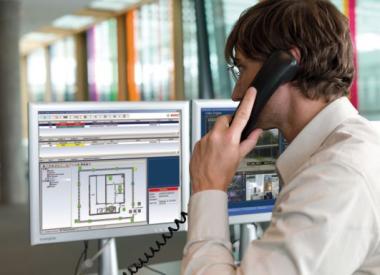 Enhanced video support
Support for video devices has been greatly enhanced in BIS 2.4. Hundreds of 3rd party video cameras can now be connected, making the Building Integration System a viable solution for heterogeneous video surveillance systems with a blend of cameras. The video engine, one of the major BIS modules, has been improved as well, offering a lot of new features on demand. Support for wide screen layouts (16:9 and 16:10) and editable alarm layouts allow for easy customization. The all new Video Recording Engine (VRE) acts as a gateway for 3rd party cameras, supporting some 800 different models including Bosch MP cameras. It also connects to the latest Bosch recording devices including Bosch Recording Station, Divar 700, VRM and to popular 3rd party devices.

Improved user interface
The operator client has also undergone a major revision. Apart from a visual facelift for faster and more intuitive operation, the client now supports up to three message inboxes. Alarm messages can be automatically routed into one of these boxes based on priority or manually shifted by operator via simple drag & drop, which greatly increases operator efficiency. The inboxes are customizable in size and position and are only presented on the screen in case of an upcoming event, resulting in better overview and overall message handling.

The Building Integration System is a modular security and safety management system which can be highly customized to suit any user's specific needs. Individual modules integrate subsystems such as video surveillance, intrusion detection, access control, and fire panels, allowing customers to reduce costs by licensing only what they really need while offering an easy upgrade path, should requirements change in the future.
The Bosch division Security Systems is a leading global supplier of security, safety, and communications products, solutions and services. Some 12,000 associates generated sales of 1,36 billion euros in fiscal 2010. Protection for people's life, buildings and assets is the aim. The product portfolio includes video surveillance, intrusion alarm, fire alarm and voice evacuation systems as well as access control, management systems and care solutions. Professional audio and conference systems for communication of voice, sound and music complete the range. Bosch Security Systems develops and manufactures in its own plants across the world.