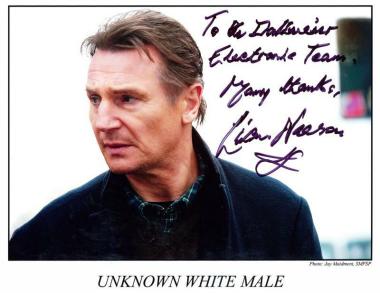 Who wouldn’t give their eye teeth to appear in a Hollywood blockbuster... Now, Dallmeier has managed to do just that: the Regensburg-based manufacturer of video surveillance solutions is now appearing in the film “Unknown”.

“Unknown” is a gripping thriller reminiscent of the Bourne trilogy. During a business trip to Berlin, scientist Dr Martin Harris is involved in a bad car accident. When he wakes up from a coma after four days, everything has changed: another man has assumed Harris’ identity. Not even his wife recognises him. Harris begins to doubt his sanity. However, when he is hunted by an unscrupulous killer, he feels certain to be the victim of a conspiracy. Together with taxi driver Gina, who rescued him after the accident, Harris fights to regain his former life.

Alongside prominent Hollywood stars like Liam Neeson as Dr Martin Harris and Diane Kruger as Gina, a “star” from Regensburg is also featured in the film: Dallmeier. Several of the film’s scenes take place at the security control centre of the Hotel Adlon. In order to make the setting as realistic as possible and interesting for filming, the film crew needed state-of-the-art technology, including cameras, digital recorders, control consoles and monitors with related software. To meet this need, they approached Dallmeier, who provided the products they required.

Shooting for the film took place on location in Berlin and Potsdam, as well as at the Studio Babelsberg film studio with the working title “Unknown White Male”. Dallmeier’s Sales Manager Thomas Dallmeier and Marketing Director Georg Martin worked with set decorator Bernhard Henrich (Comedian Harmonists, The Bourne Conspiracy, etc.) on the set in order to properly equip the backdrops of the security control room for the film. Since several of the film’s scenes take place in this security room, Dallmeier products and the company logo are featured prominently. If you haven’t seen the film yet, be sure to go to the cinema soon and count how many Dallmeier logos you see on the big screen!