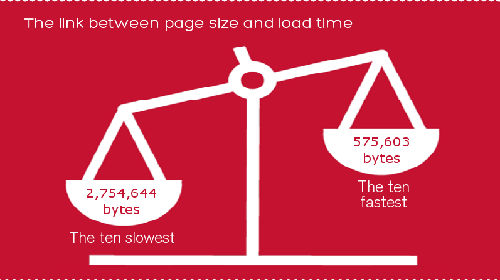 Data from the global information assurance firm revealed the websites had an average load time of 9.36 seconds during the first three months of 2014. This is more than three times the recommended standard of 3 seconds, a target met by only three of the sites tested.

Research suggests that 40 per cent of shoppers will wait no more than 3 seconds for an ecommerce site to load before abandoning it*. The inevitable conclusion is that many retailers are failing to maximise their online revenue.

Part of the problem is that sites are getting bigger. While the ten fastest sites averaged just 0.58MB in size and loaded in 3.55 seconds, the ten slowest were nearly five times larger. At 2.75MB, their average load time was 18.44 seconds

Bob Dowson, director of NCC Group’s web performance division said: “Site owners are getting more ambitious, just as consumers are becoming more demanding. The list of must-have features, from social media feeds to image galleries, is growing ever longer. A large web page isn’t necessarily a slow page, but there is usually a strong correlation. And if the consumer leaves the site before it’s loaded, the investment in all that content is wasted.”

This doesn’t mean that retailers have to settle for dull, featureless websites. Bob continued, “You don’t have to compromise on functionality if you want a fast site. But you don’t need to put everything on the home page. Your home page is like a news headline – it needs to grab the visitor’s attention before they lose interest. Research consistently shows that they won’t wait for long before they go elsewhere.”

For those retailers who decide they do need content-rich home pages, all is not lost. As Bob explained, “Even if you have a very large web page, it’s possible to organise the content so that it appears to load quickly from the end user’s point of view. The total load time might be long, but if you begin to deliver content to the screen quickly, visitors can at least start to use the site.”

However, NCC Group’s data reveals that retailers also performed poorly in this respect. Average render-start time (the time it takes for content to begin to appear on the screen) was 1.47 seconds – nearly double the recommended 0.75 seconds.

The inexorable rise of mobile browsing makes performance all the more important. Figures from the Office for National Statistics suggest that 53 per cent of people accessed the internet on a mobile phone in 2013. This compares with just 24 per cent in 2010.

This is bad news for retailers with slow sites, who won’t be able to rely on faster networks to bail them out. Bob warned, “A website that’s slow on a desktop connection will almost invariably be slower for mobile users – even those on 4G connections. Things are only going to get worse for these sites, as more people use their mobiles to shop online. For the handful of retailers with high-performing sites, however, it represents an opportunity. As the poor performers lose business from increasingly frustrated consumers, their more tech-savvy rivals are ideally placed to step in.”